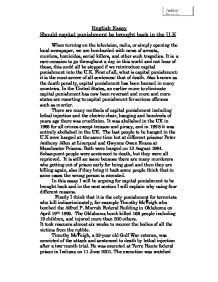 Should capital punishment be brought back in the U.K.

English Essay Should capital punishment be brought back in the U.K When turning on the television, radio, or simply opening the local newspaper, we are bombarded with news of arrests, murders, homicides, serial killers, and other such tragedies. It is a rare occasion to go throughout a day in this world and not hear of these, this could all be stopped if we reintroduce capital punishment into the U.K. First of all, what is capital punishment; it is the most severe of all sentences: that of death. Also known as the death penalty, capital punishment has been banned in many countries. In the United States, an earlier move to eliminate capital punishment has now been reversed and more and more states are resorting to capital punishment for serious offences such as murder. There are many methods of capital punishment including lethal injection and the electric chair, hanging and hundreds of years ago there was crucifixion. It was abolished in the UK in 1965 for all crimes except treason and piracy, and in 1998 it was entirely abolished in the UK. The last people to be hanged in the U.K were hanged at the same time but at different prisons: Peter Anthony Allen at Liverpool and Gwynne Owen Evans at Manchester Prisons. ...read more.

We cannot risk letting serial killers out of prison when they are "reformed" or pretend to be because they could go out and kill again, wouldn't it just be better to kill the murderers? I think it will because they will not kill again and they are not wasting anymore money, it will also stop the prisons being more crowded and having to spend more money on building more prisons, and because the murderers are the most dangerous so the Government won't have to spend as much money on making the prisons more secure. One case of this is with Ian Huntley who is being accused of killing Holly Wells and Jessica Chapman has been kept in a �200,000 super cell in a metal hospital while doctors do tests on him to find out if he is fit to stand trial. While in this super cell he has a games console, television and many other things to help him enjoy himself which I think is wrong because the �200,000 could be spent on something useful instead of on a suspected murderer he should just have the basics to live on, he may also be pretending to have psychological problems so he doesn't go to prison or have to be accused of anything. ...read more.

I think capital punishment should be brought back because it is the only way to punish international terrorists and maybe deter future ones; it also will save money which can be used in better ways like for education or medical services, it will help the victims family get over their loss, the retribution will help them and they will know the killer is dead and can't kill anyone else like they did to the family member. My next reason was that life sentence doesn't always mean life and they could be released and then commit more crimes and my last point was that it will deter other criminals from doing the same crime and therefore lowering the murder rate. Maybe we could have a public vote on whether to bring the death penalty back and then it will be fair, if it is a close result then maybe the Prime Minister should decide, a compromise could be that if a killer does any other crime then they automatically is executed, they have had their second chance and they have wasted it. All the reasons above are why I think that capital punishment should be brought back and I hope this happens in the near future. ...read more.