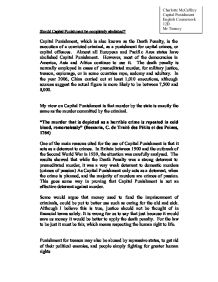 Should Capital Punishment be completely abolished?

Should Capital Punishment be completely abolished? Capital Punishment, which is also known as the Death Penalty, is the execution of a convicted criminal, as a punishment for capital crimes, or capital offences. Almost all European and Pacific Area states have abolished Capital Punishment. However, most of the democracies in America, Asia and Africa continue to use it. The death penalty is normally employed in cases of premeditated murder, for military justice, treason, espionage, or in some countries r**e, sodomy and adultery. In the year 2006, China carried out at least 1,010 executions, although sources suggest the actual figure is more likely to be between 7,500 and 8,000. My view on Capital Punishment is that murder by the state is exactly the same as the murder committed by the criminal. "The murder that is depicted as a horrible crime is repeated in cold blood, remorselessly" (Beccaria, C. de Trait� des P�t**s et des Peines, 1764) One of the main reasons cited for the use of Capital Punishment is that it acts as a deterrent to crimes. ...read more.

A potential risk with Capital Punishment is that it can be racially or socially biased. In the USA, nearly ninety percent of people executed were convicted of killing Caucasians, even though non-Caucasians make up more than fifty percent of all the murder victims. Also in America out of all the offenders sentenced to death, three quarters of those who are allocated a lawyer, as they cannot pay for one, can expect execution. If the defendant can afford to pay for a lawyer, this figure drops from three quarters, to a quarter. Basically, if you can't afford to pay for a lawyer yourself you have less chance of survival. This is very unjust as it means that even the law is in favour of those with more money, and under the law, everyone should be treated equally. There is no humane way of putting a person to death. Even if the execution itself is painless, the mental torture that the criminals suffer in the time leading up to the execution is overlooked. ...read more.

They were sentenced to life terms, and the judge expressed regret that Capital Punishment was no longer an option. The men's third appeal, in 1991 was successful, and in 2001, the men were awarded compensation between �840,000 to �1.2 million pounds. If Capital Punishment had been allowed, the judge would have used this, and then there would have been six innocent men executed. Once a life is taken, it cannot be given back. In conclusion, I believe that under no circumstances should Capital Punishment be allowed. It can possibly be biased, murder innocent people, violate human rights, and since it is not an effective deterrent, serves no purpose. The only advantage is that there is no chance of the prisoner ever being able to repeat the crime, once they are out of jail. While I understand the human instinct for revenge, the law should be, as in the words of Aristotle one of the founding fathers of law, "reason free from passion." Murder, in any case is murder, and therefore I think the death penalty should be completely abolished. ...read more.