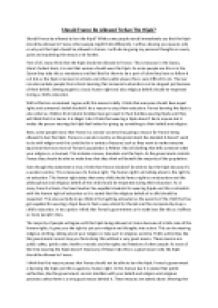 Should France Be Allowed To Ban The Hijab?

Ã¯Â»Â¿Should France Be Allowed To Ban The Hijab? Should France be allowed to ban the hijab? While some people would immediately say that the hijab should be allowed in France other people might think differently. I will be showing you reasons why or why not the hijab should be allowed in France. I will also be giving my personal thoughts on every point and explaining the reason a bit further. First of all, many think that the hijab should be allowed in France. This is because in the Quran, Islamâ€™s holiest book, it is said that women should wear the hijab. As some people see this is in the Quran they take this as mandatory and feel that for them to be a part of Islam they have to follow it out but as the hijab is banned in schools and other public places this is very difficult to do. This law can also exclude people from school meaning that someoneâ€™s education can be stopped just because of their beliefs. Getting taught is a basic human right and also religious beliefs should be respected during a childâ€™s education. ...read more.

As in many French schools, the head teacher has expelled students for wearing hijabs and this contradicts with the human right of education as it is stated that the religious beliefs of a child should be respected. This also partially stops children from getting educated as the parents of the child that has got expelled for wearing a hijab have to find a new school for the kid and this momentarily stops a childâ€™s education. In my opinion I think that Franceâ€™s government canâ€™t make laws like this as it affects so many peopleâ€™s lives. The majority of people will agree with the hijab being allowed in France because of article nine of the human rights. It gives you the right to put your religion and thoughts into action. This can be wearing religious clothing, talking about your religion or take part in religious worship. Public authorities like the government cannot stop you from doing this without a very good reason. These reasons are public safety, public order, health or morals and the rights and freedom of other people. ...read more.

Also you can identify a person by looks other than their hair or ears by knowing their eye colour. It would be nearly impossible to identify someone who is wearing the burqa just by looks though. Another point that I think opposes this argument is that you can always change your hair so identification issues would be the same even if hijabs were removed as anyone can cut their hair or dye it anytime they want. Finally, I have come to my conclusion. In this essay there were a lot of valid points about if or if not France should be allowed to ban the hijab. On the side thatâ€™s for France banning the hijab there were arguments like France is a secular country and that it harder to identify people that are wearing the hijab. On the side thatâ€™s against France banning the hijab there were reasons like wearing the hijab is in the Quran and freedom of religion is a human right. Therefore I have come to the conclusion that France shouldnâ€™t be able to ban the hijab as it is defying a human right. Now you can decide if France should be allowed to ban the hijab. ...read more.