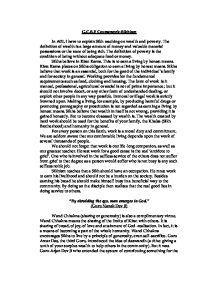 Sikhism. In A02, I have to explain Sikh teaching on wealth and poverty.

G.C.S.E Coursework-Sikhism In A02, I have to explain Sikh teaching on wealth and poverty. The definition of wealth is a large amount of money and valuable material possessions or the state of being rich. The definition of poverty is the condition of being without adequate food or money. Sikhs believe in Kirat Karna. This is to earn a living by honest means. Kirat Karna places on Sikhs obligation to earn a living by honest means. Sikhs believe that work is an essential, both for the good of the individual's family and for society in general. Working provides for the fundamental requirements such as food, clothing and housing. The form of work is it manual, professional, agricultural or social is not of prime importance; but it should not involve deceit, or any other form of underhanded dealing, or exploit other people in any way possible. Immoral or illegal work is strictly frowned upon. ...read more.

He must work to earn his livelihood and should not be a burden on the society. Besides earning his bread he should make himself busy in a beneficial way to the community. By doing so the disciple then realises that the real good lies in doing service to others. "By shredding the ego, man emerges in God." (Guru Nanak Dev Ji) Wand Chhakna (sharing or generosity) is also a complimentary virtue. Wand Chhakna means the sharing of the fruits of Kirat with others. It is sharing of bread, of joy, of love and attainment of God-realisation. In fact, it is a means of becoming a part of the whole humanity. Wand Chhakna encourages Sikhs to live by a principle of generosity, even self-sacrifice. Guru Amar Das, the third Guru, introduced the idea of daswandh (a tithe: giving a tenth of your surplus wealth to help others in the community). ...read more.

Not all manual work is seva. Seva should be active help rendered to others with a sense of devotion and humility, as well being voluntary and not done at anybody's asking. You also shouldn't expect any reward, and if you do you are not following the Sikh way of life. Seva is important because it unites humanity, by creating feelings of love for others, and it makes us better human beings by destroying the haumai. Kara seva is special types of seva don't for the construction of public gurdwaras. Sikhism also teaches the fact that poor and the rich are equal. The rich should not be treated superiors to the poor. Seva is also an important part of the religion as it involved the undertaking of manual jobs, voluntarily, for the good of others. Kirat Karna (honest work) is also a significant part of Sikhism as it involves honestly - a hugely important part of the religion. "A Sikh should live only on his honest earnings." (Rehat Maryada) "No Sikh should gamble of commit theft." (Rehat Maryada) ...read more.