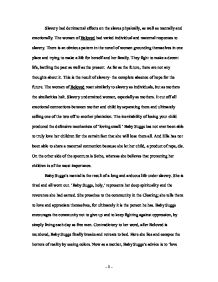 Slavery had detrimental effects on the slaves physically, as well as mentally and emotionally. The women of Beloved had varied individual and maternal responses to slavery

Slavery had detrimental effects on the slaves physically, as well as mentally and emotionally. The women of Beloved had varied individual and maternal responses to slavery. There is an obvious pattern in the novel of women grounding themselves in one place and trying to make a life for herself and her family. They fight to make a decent life, battling the past as well as the present. As far as the future, there are not any thoughts about it. This is the result of slavery- the complete absence of hope for the future. The women of Beloved react similarly to slavery as individuals, but as mothers the similarities halt. Slavery undermined women, especially as mothers. It cut off all emotional connections between mother and child by separating them and ultimately selling one of the two off to another plantation. ...read more.

Baby Suggs encourages the community not to give up and to keep fighting against oppression, by simply living each day as free men. Contradictory to her word, after Beloved is murdered, Baby Suggs finally breaks and retreats to bed. Here she lies and escapes the horrors of reality by seeing colors. Now as a mother, Baby Suggs's advice is to 'love small.' She has had many children and was unable to love and connect with any of them, except Halle. It was a miracle to share so many years with Halle. Ella, like Baby Suggs, believes in the idea of protecting oneself from the hurt of losing a loved one. In fact, as soon as she saw the look in Sethe's eyes for her baby, she told Sethe "". ...read more.

To Sethe, her reaction is the ultimate expression of her love for them; she spends the rest of her life defending her actions. Baby Suggs and Ella understand Sethe's actions, but they cannot truly connect with her because they have not ever allowed themselves to love their children that much. And finally in the end of the novel, Sethe, crazily desperate, tries to kill Bodwin to prove to Beloved her love for her. In response to slavery, the women strategize to protect themselves and for Sethe she had to protect her children as well. Their coping mechanisms do not actually work and prevent them from appreciating life and preventing real personal relationships. Their scars are left unhealed and issues unresolved. Their maternal responses vary, but for the most part, the females as individuals exhibit the pattern of remaining in one place and confronting life. ?? ?? ?? ?? - 1 - ...read more.