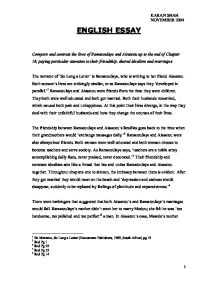 'So Long a Letter' - Compare and contrast the lives of Ramatoulaye and Aissatou up to the end of Chapter 16, paying particular attention to their friendship, shared idealism and marriages.

Seynabou took care of Nabou's education and trained her as a mid-wife. Seynabou then approached Mawdo, 'I will never get over it if you don't take her as your wife. Shame kills faster than disease.'9 Mawdo faced immense pressure from his mother and married Nabou. Aissatou was distraught and left him 'stripping herself of his love and his name.'10 Aissatou seeked solace in books and became an interpreter in the Senegalese embassy in the United States. Ramatoulaye and Modou's daughter Daba had a close friend, Binetou who often came home. One day, Binetou informed Daba and Ramatoulaye that she wanted to get married to her 'sugar daddy,'11 a man who showered expensive gifts on her. On the morning of the marriage, Ramatoulaye was crudely told by the Imam and by Modou's brothers that the 'sugar daddy' was her husband. She then watched her husband take a second wife. Ramatoulaye was devastated by her husband's remarriage. 'She cried everyday.'12 Unlike, Mawdo who still cared for Aissatou, Modou never returned to his house and completely forgot about his wife and children. ...read more.