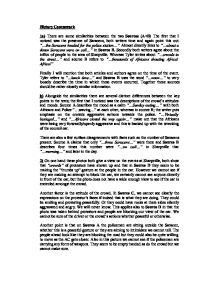 Source based discussion on the events at Sharpville.

History Coursework 1a) There are some similarities between the two Sources (A+B) The first that I noticed was the presence of Saracens, both writers time and again point this out: "...the Saracens headed for the police station..." Almost directly links to "...about a dozen Saracens were on call..." in Source B. Secondly both writers agree about the influx of people to the area of Sharpville. Whereas Tyler writes about "...crowds in the street..." and source B refers to "...thousands of Africans shouting Africa! Africa!" Finally I will mention that both articles and authors agree on the time of the event. Tyler refers to "...lunch time..." and Source B uses the word "...noon..." to very loosely describe the time in which these events occurred. Together these sources should be rather closely similar information. b) Alongside the similarities there are several distinct differences between the key points in the texts; the first that I noticed was the descriptions of the crowd's attitudes and moods. Source A describes the mood as a calm "...Sunday outing..." with both Africans and Police "...waving..." at each other, whereas in source B; the writer puts emphasis on the crowds aggressive actions towards the police. "...Virtually besieged..." and "...Africans closed the way again..." make out that the Africans were being very forwardly/openly aggressive and this is backed up with the wrecking of the council car. ...read more.

However there is the possibility that their position and sympathy towards the cause would blind them from the truth. Both sources agree that there was "...no weapons..." present and the crowd "...was not armed..." Source A, states that the police were hit by stones, only 3 times and this doesn't to me seem enough reason to fire upon a crowd of 4,000 people. Source A states that the police claimed to being "...Stoned." And that the crowd had "...ferocious weapons..." yet both Tyler and Ambrose agree that there was definitely no weapons present. The only problem with the two sources are that Tyler and Reeves are both sympathisers to the victims cause and could have quite easily written biased information claiming that the polices actions were unnecessary. All the statements came from victims and sympathisers, this could again have de-valued the material in terms of reliability 4) I will begin by questioning each source's reliability in turn. Source E, was written again by Tyler who was present at the location of Sharpville as these events happened. He seems to write a true experience of what happened; yet I feel that his sympathy for the Africans at that time could have swayed his thoughts and writing style. The information throughout agrees with other peoples in which I have already suggested in previous questions. ...read more.

Things such as "Telephone wires were cut" and "...Forcibly removing their identity books." Made the actions of the demonstrators seem threatening and violent. (Source J) Once again, the South African Embassy in London put a large emphasis on the "violent nature" and aggressiveness of the demonstrators. They highlight events such as "... nine policemen were brutally battered to death..." They consistently say that the protestors had weaponry and exaggerate the amount that was present. 5b) Now we can fully understand as to each person attitude towards the Africans combined with my knowledge of South African history, we can now discuss why these three sources are considerably different to the other sources given. In Source H Colonel Piernaar gives a very blatantly r****t view on the events at Sharpville, his account is very much on the defensive and he tries to justify their actions through Apartheid "...they must learn their lessons the hard way." He does this through emphasising the aggressiveness of the crowd through violent wording "...hordes of natives surrounded the police station..." is just one example of this within his view of the shootings. Dr Verwoerd, again is very similar to Piernaar in his differences, although he does not give a direct r****t comment he goes to more trouble to indirectly emphasise the attitude of the demonstrators. Within Source I he uses language such as "...forcibly removing identity books." ...read more.