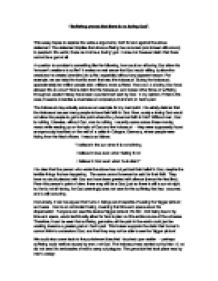 Suffering proves that there is no loving God

"Suffering proves that there is no loving God" This essay hopes to explore the various arguments, both for and against the above statement. The statement implies that since suffering has occurred (and indeed still occurs) to people in this world, there cannot be a 'loving' god. It does not however claim that there cannot be a god at all. A question to consider is something like the following; how could an all loving God allow his 'innocent' creations to suffer? It makes no real sense that God would willingly allow the creatures he created (mankind) to suffer, especially without any apparent reason. For example, we can take the horrific event that was the holocaust. ...read more.

It reads as follows: "I believe in the sun when it is not shining. I believe in love even when feeling it not. I believe in God even when he is silent." It is clear that the person who wrote the above has not yet lost their belief in God, despite the terrible things that are happening. The same cannot however be said for their faith. They have no doubt pleaded with God and have been greeted with silence (hence the final line). From this person's point of view, there may still be a God; just as there is still a sun at night, but he is not all-loving, for God seemingly does not care for the suffering that has occurred, and is still occurring. ...read more.

The holocaust was carried out by Man; God did not send his emissaries of evil to carry out plagues. The genocide that took place was by man's design. In all honesty, I agree with the statement. However, I only agree if it is taken on a very technical level. I do agree that God cannot be a loving being if he allows suffering on such grand scales to occur. However, the statement is often misinterpreted as "God does not exist, since suffering occurs", all that is required for God to no longer exist (in my opinion), is for people to lose faith in him. Should that faith remain, God will remain. As can be seen from the anecdote I noted above, it takes a lot for people to lose faith. ...read more.