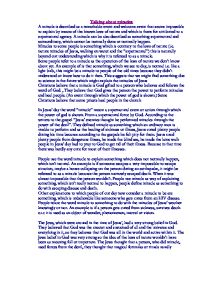 Talking about miracles A miracle is described as a remarkable event and welcome event that seams impossible to explain by means of the known laws of nature and which is there for attributed to a supernatural agency. A miracle can be also described as something supernatural and extraordinary, which cannot be normally done or normally happen. Miracles to some people is something which is contrary to the laws of nature (i.e. nature miracles of Jesus, walking on water and the "supernatural") this is naturally beyond our understanding which is why it is refereed to as a miracle. Some people refer to a miracle as the operation of the laws of nature we don't know about yet. An example of is that something, which we see to day, is normal i.e. like a light bulb, this might be a miracle to people of the old times because they didn't understand or know how to do it then. This suggests that we might find something due to science in the future which might explain the miracles of Jesus Christians believe that a miracle is God gifted to a person who believes and follows the word of God. , They believe that God gives the person the power to perform miracles and heal people. (An event through which the power of god is shown.) Some Christians believe that some priests heal people in the church In Jesus' day the word "miracle" meant a supernatural event or action through which the power of god is shown. From a supernatural force by God. According to the writers to the gospel "Jesus' enemies thought he performed miracles through the power of the devil". They defined miracle as something which an ordinary man is unable to perform and as the healing of sickness or illness, Jesus cured plenty people during his time because according to the gospels he felt pity for them. ...read more.

Christians go to hospital not because they don't believe in the healing miracles but just because it is a quicker option. The Christians who do not necessary go to the hospital when they get ill normally pray to God to get healed, these people are normally the ones with a lot of faith and belief. I can see why people would not believe in the healing miracles happening today because of the belief in science and medicine and science seams to know all, nowadays and they present a more attractive and quicker, easier solution or way out. World Hunger - Christian beliefs. A. What do Christians teach about the causes of hunger and diseases today? Hunger can be described as the need or desire for food lack of food leading to sickness or death. The immediate short-term causes of hunger includes: Lack of developed equipment for producing sufficient food, this means they take longer to produce food and also don't produce enough to feed people, at the specific time needed. This means there are normally lower yield, and more energy used. Lack of developed form of treatment for diseases, so people cannot produce their own food when they're ill. Famine and droughts in countries, famine normally occurs when there isn't enough food to feed people at a specific time, people may starve and could die because of this. Causes of famines may be the lack of water in some areas of the countries, natural and natural disasters Things like this above produce a cycle of poverty. Christians believe that a number of things cause hunger and disease. Christians normally believe and teach that to be poor is not to satisfy basic human needs. The basic needs which these Christians are trying to put across are things like health, food to be able to sustain life, shelter and clothing, things like education and social participation also includes the these things. ...read more.

Christians believe that God loves the world and all that's in it, they believe that God became a human in Jesus and that in a real sense they meet God in every human being. Christian faith provides the example of Jesus and how he mixed with, and showed respect for, the poor and the despises, this can been seen in the parables which Jesus told and how he taught them to treat people equally and help others, treating them with compassion and respect. Many Christians believe that faith is not a private matter but means putting faith into action, Christian faith provides a vision of what life could be like if people become less self-centred. They work towards his vision, by helping the world's poor. This shows that Christian beliefs asks of people to take a responsibility for each other no matter where in the world that they live. Christians believe God loves the world and all that is in it. Jesus mixed with and respected those who were poor or despised by others this is a good example for Christians to follow, the old testament makes powerful statements about justice, and Jesus adds to these in his own teaching. Christians should commit themselves to live out this teaching on how people should treat the poor. I believe that those who aren't Christian should also help the people around the world. Although they aren't Christians and they do not follow that teaching of the bible, they might follow other religions, which teach them to help others. Also the bible teachings are simple moral beliefs which anybody can follow. People should help other people round the world no matter their faiths or beliefs, people have consciences and moral standards, I think they should use this to guide them to help others so the world can become a better place for people to live in. I don't think that anyone HAS TO help people, but people should Chose to help people. ...read more.