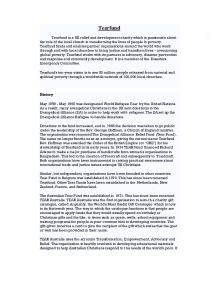 Tearfund Tearfund is a UK relief and development charity which is passionate about the role of the local church in transforming the lives of people in poverty. Tearfund funds and enables partner organisations around the world who work through and with local churches to bring justice and transform lives - overcoming global poverty. Tearfund works with its partners in advocacy, disaster prevention and response and community development. It is a member of the Disasters Emergency Committee. Tearfund's ten-year vision is to see 50 million people released from material and spiritual poverty through a worldwide network of 100,000 local churches. o History May 1959 - May 1960 was designated World Refugee Year by the United Nations. As a result, many evangelical Christians in the UK sent donations to the Evangelical Alliance (EA) in order to help work with refugees. The EA set up the Evangelical Alliance Refugee to handle donations. Donations to the fund increased, and in 1968 the decision was taken to go public under the leadership of the Rev. ...read more.

It is a member of the Micah Network, an international alliance of Christian relief and development non-governmental organizations (NGOs). Campaigning Tearfund, like many other NGOs, gets involved in campaigning - particularly to change things that they see as being causes of poverty. Tearfund is a member organisation of several coalitions, including: * The European Network on Debt and Development (Eurodad). * The Jubilee Debt Campaign * The Make Poverty History campaign * The Stop AIDS Campaign * The Stop climate chaos campaign * The Trade Justice Movement Funding In the UK, Tearfund receives most of its funding from Christians. It has an extensive network of volunteers who raise support. This is most likely because they only advertise in Christian papers and newsletters. In Belgium, Tearfund receives most of its funding from Christians related to the Evangelical Alliance. I will now talk about a case study which involves Tearfund.: Jubilee Debt Coalition * Jubilee Debt Coalition (Drop The Debt) is a coalition of national organisations and local groups around the UK, calling for the unpayable debts of the poorest countries to be cancelled. ...read more.

The campaign encourages UK citizens to call on the Secretary of State to hold an audit of such loans and to cancel any that are found to be dubious in such a manner. The 2006 campaign, 'Cut the Strings' focused on the harmful and unfair conditions often attached to debt relief. (See also HIPC initiative - Heavily Indebted Poor Countries Initiative). The world's poorest countries are at times required by the agencies of the G8 (The IMF and World Bank) to cut public spending and privatise health-care and other services to secure debt relief. If the country being considered for debt relief does not stay 'on track', cancellation may be delayed or withheld. As a result of decisions made at the G8 Summit in Gleneagles, following the Make Poverty History campaign and Live 8 event, JDC called on the British government to return money received from Nigeria as part of a debt cancellation condition. Jubilee Debt Campaign was an active member of the Make Poverty History Coalition, one of whose key aims was to "Drop the Debt," along with "Make Trade Fair" (Trade Justice Coalition) and "More and Better Aid." Location The Coalition's Secretariat is in Islington, London. ...read more.