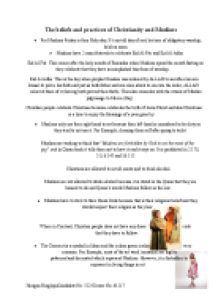 The beliefs and practices of Christianity and Muslims

﻿The beliefs and practices of Christianity and Muslims 1. For Muslims Friday is their Holy day, It?s not all day of rest, but one of obligatory worship, held on noon. 2. Muslims have 2 main festivals to celebrate Eid Al-Fitr and Eid Al-Adha. Eid Al Fitr: This comes after the holy month of Ramadan when Muslims spend the month fasting so they celebrate that they have accomplished this form of worship. Eid Al Adha: This is the day when prophet Ibrahim was ordered by ALLAH to sacrifice his son Ismael to prove his faith and just as both father and son were about to execute the order, ALLAH relieved them of it (having both proved their faith). This also coincides with the rituals of Muslim pilgrimage to Mecca (Haj). Christian people celebrate Christmas because celebrates the birth of Jesus Christ and also Christmas is a time to enjoy the blessings of a year gone by. 1. Muslims only use their right hand to eat because their left hand is considered to be dirty so they tend to not use it. For Example, cleaning them self after going to toilet. Muslims are tending to think that ?Muslims are forbidden by God to eat the meat of the pig? and in Quran book it tells them not to have it and it says on. ...read more.

Meat should be halal that is animals and fish must be slaughtered in a particular way Christiansted can use any hand to eat Right hand to eat and left hand is used to clean them selves Lent is a period of fasting where Individuals have to give up something and get ready for Easter They have fast (Muslims do not eat or drink during the hours of daylight) and In Islam festival they usually do fasting in Ramadan. The Second marks the end of Hajj, the annual pilgrimage to Mecca Christian?s prayer is well known and is called ?our father? or ?The Lords Pray? Shahadah is chant that they repeated over and over again In Christian religion they can pray whenever they want In Islam Muslims have to pray 5 times a day To worship god, Christian does not use any sort of Equipments People have to use a prayer mat to worship They have no Dress Code Many Muslims men and woman adhere to a dress code which include covering the body shape in loose garments Muslims ladies and young girls wear a scarf hide their dignity Catholics have a choice of love marriage or arrange marriage Muslims have to have an arranged marriage Catholics are allowed to drink freely and whenever they want Muslims are not allowed to drink alcohol at all Christians live by the 10 commandments Muslims are guided by 5 Pillars of Islam Is not compulsory to give it to charity Zakat (giving a fixed proportion to a charity) ...read more.

To keep Tracy?s discriminatory behaviour towards to Mary could lead to stress and it has range of physical effects on health well being This include Sleeplessness, high blood pressure, ulcers, heart disease, self esteem, headaches, tension, eczema. This could lead to more Health Problems. She could be anxious and depressed which can cause her to be distracted. Lose concentration and might not enjoy her life. It can also cause paranoia, a sense not feeling safe and living in fear of others. In addition, she may be feeling in lack of confidence and not being worth of anything. After being told she can?t go out or play bingo or snakes and ladders and that being left out she may became lazy because she has told to watch the television. Discrimination can cause nervous feelings as well irritability and can lead to depression and also nervous breakdown so, it can give a person a feeling of low self worth and she might be unhappy. Mary?s Social effect of discrimination can be person becoming withdrawn and not wanting to be with other people. Such as person may lose a sense of who she or he is. Plus, this can lead to social isolation. Depression: People with depression may have physical and social such as slow movement, constipation and changes in the menstrual cycle and in sleep patterns and will avoid contact with others and sociable thought. Harigna HinglajiaCandidate No: 5225Centre No: 61217 ...read more.