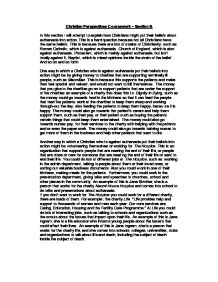 The benefits of euthanasia to Christians

Christian Perspectives Coursework - Section B In this section I will attempt to explain how Christians might put their beliefs about euthanasia into action. This is a hard question because not all Christians have the same beliefs. This is because there are lots of strains of Christianity; such as: Roman Catholic, which is against euthanasia, Church of England, which is also against euthanasia, Protestant, which is mainly against euthanasia, but isn't totally against it, Baptist, which is mixed opinions inside the strain of the belief. And so on and so forth. One way in which a Christian who is against euthanasia put their beliefs into action might be by giving money to charities that are supporting terminally ill people, such as Macmillan. This is because this supports the patients and make then feel special and valued, and would not want to kill themselves. The money that you give to the charities go on to support patients that are under the support of the charities an example of a charity that does this is: Dignity in Dying, such as the money could go towards food in the kitchens so that it can feed the people that feed the patients work at the charities to keep them sharp and working through-out the day, also feeding the patients to keep them happy, because it is happy. ...read more.

Voting for members of parliament with the same beliefs and views as you on euthanasia. Another way to put your belief that is against euthanasia into action is by preaching to people in streets on a busy Saturday lunch time when everyone is out shopping so that you can get lots of peoples attention, and tell them why these laws to do with euthanasia are so important. You could also preach during church services, and tell the believers all the important laws that keep the beliefs of the religion into law. Another way in which Christians who are against euthanasia could put their beliefs into action is by praying. One way is by asking god to take responsibility, for example if you know someone that wants to kill themselves then you can pray to God and he could let them know that life is worth living. Another way you could pray is by praying to God about easing suffering for possibly someone that you know or care about, or just ease suffering for everyone that is contemplating euthanasia. Another way in which prayer could be used is by praying for a miracle to happen, such as a person to come along and change the patient's opinion and to change their beliefs from wanting to kill themselves to not wanting to kill themselves. ...read more.

You could do this by asking God to change the law on euthanasia and ask him to legalize it, to ease the suffering of a large amount of people that want to kill themselves. You could also pray for someone that wants to kill themselves to die naturally prematurely, so that the person that wants to die won't have any pain anymore. Furthermore, for example if you knew that someone that was going to be euthanized you could pray to god and ask him that the euthanasia will go smoothly and according to plan. Also, another way in which that a Christian could put their support of euthanasia into action is by preaching to people. You could do this by telling people in the street on a busy Saturday that the government should change the law on euthanasia and that they should support it. You could also tell them this at a Sunday church service. Telling the believers that euthanasia is a good idea, quoting from the bible why euthanasia is a good idea. In conclusion to this question, there is more than one opinion to this delicate matter. People are allowed their own opinion on this matter and we shouldn't question it, just like if someone want to be euthanized to wanted to die we shouldn't question them or judge them because at the end of the day only God has the right to do it. ...read more.