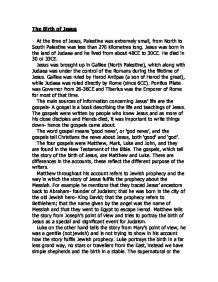 The Birth of Jesus.

The Birth of Jesus At the time of Jesus, Palestine was extremely small, from North to South Palestine was less than 270 kilometres long. Jesus was born in the land of Judaea and he lived from about 4BCE to 30CE. He died in 30 or 33CE. Jesus was brought up in Galilee (North Palestine), which along with Judaea was under the control of the Romans during the lifetime of Jesus. Galilee was ruled by Herod Antipas (a son of Herod the great), while Judaea was ruled directly by Rome (since 6CE). Pontius Pilate was Governor from 26-36CE and Tiberius was the Emporer of Rome for most of that time. The main sources of information concerning Jesus' life are the gospels- A gospel is a book describing the life and teachings of Jesus. ...read more.

The gospels, which tell the story of the birth of Jesus, are Matthew and Luke. There are differences in the accounts, these reflect the different purpose of the writers. Matthew throughout his account refers to Jewish prophecy and the way in which the story of Jesus fulfils the prophecy about the Messiah. For example he mentions that they traced Jesus' ancestors back to Abraham- founder of Judaism; that he was born in the city of the old Jewish hero- King David; that the prophecy refers to Bethlehem; that the name given by the angel was the name of Messiah and that they went to Egypt to escape Herod. Matthew tells the story from Joseph's point of view and tries to portray the birth of Jesus as a special and significant event for Judaism. ...read more.

Also, Luke wrote about how Jesus was the son of man, very special, but not glorified in any way. The significance of the stories for Christians is that put together they offer a picture of the birth of Jesus, who Christians believe to be the 'Son of God'. For this reason the stories have become an important part of Christian tradition and practise, as seen in the celebration of Christmas. Where they are told to read in churches over the Christmas period. Although, according to the account of Luke, December the 25th could not be the actual birthday of Jesus. It was said that the shepherds left their flocks of sheep out at night- at December it would be far too cold. So it is believed that Jesus was really born somewhere between March, April and May. ...read more.