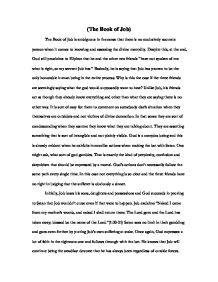 The Book of Job

(The Book of Job) The Book of Job is ambiguous in the sense that there is no exclusively accurate person when it comes to knowing and assessing the divine mentality. Despite this, at the end, God still proclaims to Eliphaz that he and the other two friends "have not spoken of me what is right, as my servant Job has." Basically, he is saying that Job has proven to be the only honorable human being in the entire process. Why is this the case if the three friends are seemingly saying what the god would supposedly want to hear? Unlike Job, his friends act as though they already know everything and other than what they are saying there is no other way. It is sort of easy for them to comment on somebody else's situation when they themselves are outsiders and not victims of divine damnation. In that sense they are sort of condescending when they assume they know what they are talking about. They are asserting something that is sort of intangible and not plainly visible. God is a complex being and this is already evident when he exhibits humanlike actions when making the bet with Satan. One might ask, what sort of god gambles. That is exactly the kind of perplexity, confusion and skepticism that should be expressed by a mortal. ...read more.

(6:24) After this first brief encounter with his friend Job decides to ask God some questions regarding his status. Job asks God how he has sinned. What has he done to him? This questioning of God and doubt may on the surface seem rude on Job's part, but this questioning and lack of understanding is exactly what God likes. He would much rather prefer that than what Job's friends do when they claim they know everything about how God functions and works. Then, Bildad and Zophar approach Job as well after each time he asks God a question or complains about his suffering. They always rebuke him saying he has sinned, that he has used strong words when addressing the God and that to obtain restoration he needs to seek him as soon as possible. Zophar even claims that Job's punishment is less than he deserves which is preposterous when he doesn't even know why God is doing what he is in fact doing. Who is he to assess whether the punishment good enough? Job basically agrees with what Bildad says at one point about God not casting away the blameless nor upholding evildoers, but at the same time asks the question, how can one be righteous before God? Questioning is good. ...read more.

Anyone who argues with God must respond." (40:2) Job maintains his composure and rightfully answers that he is in fact unworthy. Then God summons the behemoth and leviathan displaying his power once again and proving that he is capable of anything. Job understands this, but unfortunately the three friends did not and this is the cause of God's statement at the end. Therefore, at the end God is fair to say that the three friends in fact "have not spoken of me what is right, as my servant Job has " (42.7) Although Job constantly questions and complains to God about his suffering he never he never directly charges god with being wrong. He never crosses the line and humbly submits to God when told that the answers to his questions are beyond his ability to understand. For this reason Job is righteous and can be seen as a prime example of how the righteous should act in times of suffering. It is difficult to bring everything that God does into one perfect little tangible puzzle. No matter what the circumstances may be God, needs to be trusted. Suffering is not always the result of personal sin and this is clearly evident in the Book. Job is very patient, and he withstands and endures everything that is happening to him. In the end he rightfully gets tenfold back in return for his righteousness. ...read more.