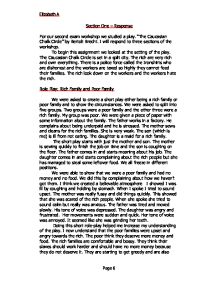 &quot;The Caucasian Chalk Circle&quot; by Bertolt Brecht. I will respond to three sections of the workshop. To begin this assignment we looked at the setting of the play.

Section One - Response For our second exam workshop we studied a play. "The Caucasian Chalk Circle" by Bertolt Brecht. I will respond to three sections of the workshop. To begin this assignment we looked at the setting of the play. The Caucasian Chalk Circle is set in a split city. The rich are very rich and own everything. There is a police force called the Ironshirts who are dishonest and the workers are taxed so highly they cannot feed their families. The rich look down on the workers and the workers hate the rich. Role Play: Rich Family and Poor Family We were asked to create a short play either being a rich family or poor family and to show the circumstances. We were asked to split into five groups. Two groups were a poor family and the other three were a rich family. My group was poor. We were given a piece of paper with some information about the family. The father works in a factory. He complains about being underpaid and he is stressed. The mother sews and cleans for the rich families. She is very weak. The son (which is me) is ill from not eating. The daughter is a maid for a rich family. ...read more.

The ironshirts were played naturalistically to create tension and pressure for Grusha. Jade did not know she was going find a baby therefore she wasn't prepared to be ready to take away. Jade facial expression tells us that she is frightened and upset. She moves quickly but silently. She keeps looking around to show fear. When she walks away from the baby, we spoke loudly. Her tone of voice was scared. The Ironshirts stood upright looking over a map. They spoke seriously and calmly. Their facial expressions were normal as though they look for babies and kill them all the time. By having the Ironshirts there, they give more reason for Grusha to take the baby. They added on pressure, fear and isolation because they wanted to kill the baby and Grusha didn't want the baby to be killed. I think we managed to make the audience sympathetic of her situation because they didn't want the baby to be killed either. Role-play has helped me increase my understanding of the difficulty of Grusha's decision. Grusha had to chose between Michael (baby) and Simon. She loves Simon but she couldn't leave the baby behind to die. Epic Representation of Grusha's Dilemma We were asked to perform the same moment in Epic Style, using Brechtian devices. ...read more.

Dramatic style We stayed in the same group. We decide to change the script to make the situation more emotional. The actors spoke in first person and less formal language. (Attached #1). I was Michael. I showed I was a little kid by trying to juggle with balls. Stephanie was the husband of Grusha. Her movement was sudden and harsh. She spoke angrily. Her facial expressions were annoyed. She came in and pushed me and complained that I always in the way. Adding the characters of Yassup and Michael made the audience take more pity on Grusha. Grusha is busy doing the washing when Simon comes along. Grusha is fed up and depressed. When she sees Simon she is happy but uncomfortable. Simon is pleased to see her but when he notices the ring his facial expressions change to devastated. Simon walks off when he sees the child and Grusha is now upset and desperate for Simon. In this performance we had naturalistic props like the juggling balls. We used dim stage lighting to add atmosphere. We had facial expressions to show feelings instead of speaking the stage directions. This time the audience was allowed to get emotionally involved. We used the same positions as last time but Yassup and Michael were on Grusha side of the river. The reason we cut out the narrators is because they destroyed the realism and element of suspense. Elizabeth A Page 6 ...read more.