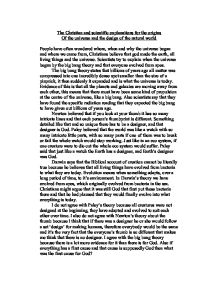 The Christian and scientific explanations for the origins Of the universe and the design of the natural world People have often wondered where, when and why the universe began and where we came from, Christians believe that god made the earth, all living things and the universe. Scientists try to explain when the universe began by the big bang theory and that everyone evolved from apes. The big bang theory states that billions of years ago all matter was compressed into one incredibly dense spot smaller than the size of a pinprick, it then suddenly it expanded and is what the universe is today. ...read more.

Something detailed like that and so unique there has to be a designer, and that designer is God. Paley believed that the world was like a watch with so many intricate little parts, with so many parts if one of them was to break or fail the whole watch would stop working. Just like in an eco system, if one creature were to die out the whole eco system would suffer. Paley said that just like a watch the Earth has a designer, and Earth's designer was God. Darwin says that the Biblical account of creation cannot be literally true because he believes that all living things have evolved from bacteria to what they are today. ...read more.

I do not agree with Paley's theory because all creatures were not designed at the beginning, they have adapted and evolved to suit each other over time. I also do not agree with Newton's theory about the thumb because I think that if there was a designer he or she would follow a set 'design' for making humans, therefore everybody would be the same and it's the very fact that the everyone's thumb is so different that makes me think that there is no designer. I agree with the big bang theory because there is a lot more evidence for it than there is for God. Also if everything has a first cause and that cause is supposedly God then what was the first cause for God? ...read more.