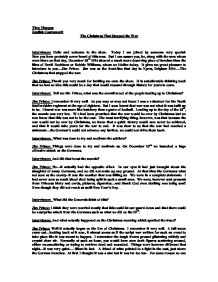 The Christmas That Stopped the War

Theo Yiangou English Coursework The Christmas That Stopped the War Interviewer: Hello and welcome to the show. Today I am joined by someone very special. Now you have probably never heard of this man. But I can assure you, he, along with the men whom were there on that day, December 25th 1914 showed a much more deserving piece of heroism than the likes of David Beckham or Robbie Williams, whom we idolize today. It gives me great pleasure to introduce to you...Jim Prince. Jim was on the front-line that day in Ypres, Belgium 1914....The Christmas that stopped the war. Jim Prince: Thank you very much for inviting me onto the show. It is unbelievable thinking back that we had no idea this would be a day that would resound through history for years to come. Interviewer: Tell me Mr. Prince, what was the overall mood of the people leading up to Christmas? Jim Prince: I remember it very well. As you may or may not know I was a volunteer for the North Staffordshire regiment at the age of eighteen. But I soon learnt that war was not what it was built up to be. ...read more.

Jim Prince: At first, standing outside of the trench, I was afraid and very uneasy. As we began to talk things started to become a lot easier, and sooner or later we had become friends. Then as I began to think about it a bit more and things began to clear I started to think what are Headquarters would make of this. After all, I was aware that this was one step away from treason, and the punishment for treason was death. Interviewer: People find it difficult to understand that you fought against each other as enemies could now make peace for once at Christmas. What would you say to this? Jim Prince: Well, once you began to talk with these men, you became even more aware that they were going through the same misery as you, and that you had so much in common with them. I tell you now.... the average British soldier had more in common with his German counterpart than he did with his officer. What people forget is that although the war stopped in many places, there were areas where the war continued...where both sides lost many men in action. ...read more.

Interviewer: Do you think it was the British High Command issuing stern orders that brought about no further fraternization in further years? Jim Prince: Yes I think it was. However, I do believe it was the introduction of flame-throwers and poison gas in 1915 which helped to rule them out. From then on it is easy to say that bitterness just increased. Interviewer: In your view, could the Christmas truce have actually ended the war? Jim Prince: I think it may have. If the armistice had continued for another week or so...well then I think it would have been very difficult to get the war started again...it would have been impossible. Interviewer: Thank you ever so much for joining us this morning Mr. Prince. It has been a true privilege to hear your story first-hand. Jim Prince: Thank you. Interviewer: As we reach the end of the show, let me just leave you with something that you can think about. World War One was like four years of h**l. And for just one day during these four years there was a sparkle of hope and humanity, that is what the Christmas Truce was. Hopefully this will make you think about what you would have done in these circumstances and will also lead to the next question- "War or Peace" ...read more.