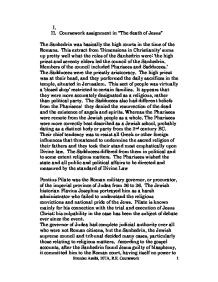 The death of Jesus

I. II. Coursework assignment in "The death of Jesus" The Sanhedrin was basically the high courts in the time of the Romans. This extract from 'Dimensions in Christianity' sums up pretty well what the roles of the Sanhedrin were: 'the high priest and seventy elders led the council of the Sanhedrin. Members of the council included Pharisees and Sadducees.' The Sadducees were the priestly aristocracy. The high priest was at their head, and they performed the daily sacrifices in the temple, situated in Jerusalem. This sect of people was virtually a 'closed shop' restricted to certain families. It appears that they were more accurately designated as a religious, rather than political party. The Sadducees also had different beliefs from the Pharisees: they denied the resurrection of the dead and the existence of angels and spirits. Whereas the Pharisees were remote from the Jewish people as a whole. The Pharisees were more correctly best described as a Jewish school, probably dating as a distinct body or party from the 2nd century BC. Their chief tendency was to resist all Greek or other foreign influences that threatened to undermine the sacred religion of their fathers and they took their stand most emphatically upon Divine law. The Sadducees differed from them in political and to some extent religious matters. The Pharisees wished the state and all public and political affairs to be directed and measured by the standard of Divine Law Pontius Pilate was the Roman military governor, or procurator, of the imperial province of Judea from 26 to 36. The Jewish historian Flavius Josephus portrayed him as a harsh administrator who failed to understand the religious convictions and national pride of the Jews. Pilate is known mainly for his connection with the trial and execution of Jesus Christ; his culpability in the case has been the subject of debate ever since the event. The governor of Judea had complete judicial authority over all who were not Roman citizens, but the Sanhedrin, the Jewish supreme council and tribunal decided many cases, particularly those relating to religious matters. ...read more.

There will be earthquakes everywhere, and there will be famines. These things are like the first pains of childbirth." " You yourselves must be on guard. You will be arrested and taken to court. You will be beaten in the synagogues; you will stand before rulers and kings for my sake to tell them the good news. But before the end comes, the gospel must be preached to all peoples. And when you are arrested an taken to court, do not worry beforehand about what you are going to say; when the time comes, say whatever is then given to you. For the words you speak will not be yours, they will come form the Holy Spirit. Men will hand over their own brothers to be put to death, and fathers will do the same to their children. Children will turn against their parents and have them put to death. Everyone will hate you because of me. But whoever holds out to the end will be saved" Jesus simply dismisses things that we class as major disasters by personifying them as 'the first pains of childbirth.' This is just to play down the fact of a suffering messiah and give people hope. Psychologically - if Jesus who is meant to be the Son of God - is suffering then what hope have us 'ordinary' people got. This is emphasised throughout the gospel to give us a reason to live. In my opinion Jesus wasn't given a fair trial by a long shot. There were a lot of irregularities and discrepancies that didn't comply with standard procedure according to Mark. III. The Sanhedrin did not usually meet at the high priests house; IV. Trials, which involved the possible sentence of death, were not allowed at night; V. A verdict of guilty required that the sentence should be delayed for twenty-four hours; VI. Witnesses were warned that if they gave false evidence they would suffer the same verdict which would have been awarded to the accused; VII. ...read more.

They say that if God only sent people good things, and no suffering, then people would have no choice but to love God and follow his teaching. So, some people might believe that, since suffering makes it possible for people to reject God and do evil, suffering is a test of your faith and if you maintain your belief in times of suffering then it helps make your faith stronger. Alternatively, Hinduism teaches that all suffering in this life is a result of people's actions in their previous life and, therefore, suffering has no power to make people 'stronger' or 'better'. Some religions, like Christianity, also teach that there can also be a spiritual value in suffering which helps them become better people. Christians maintain that when they suffer they are sharing in Jesus' suffering for the sins of the whole world (Colossians 1:24) and, because Jesus himself suffered, Christians believe that God understands human suffering and offers comfort and strength in times of suffering. Christians also believe that in life after death there will be no suffering as, "God will wipe away all tears from their eyes. There will be no more death, no more grief or crying or pain..." (Revelation 21:3-4). As far as most people are concerned we live in a world that is less than perfect. Now although it could be argued that we have not experienced any other world, and so be able to assess whether this present world is either better or worse against our experience of any other world, people still sense that all is not well here. Although famine, war, earthquakes, disease and crime are common features of our world, most people would be happy to live without them. In conclusion you might say that, in some cases, suffering might enable people to become stronger or better, but that is not guaranteed. Some people may not be able to cope with their particular suffering and may have a nervous breakdown or commit suicide because of it. 1 Brendan Assibi, 10TA, R.E. Coursework ...read more.