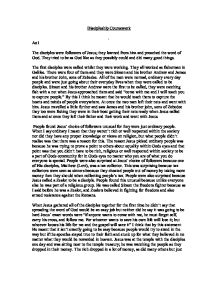 The disciples were followers of Jesus; they learned from him and preached the word of God. They tried to be as God like as they possibly could and did many good things.

Discipleship Coursework . Ao1 The disciples were followers of Jesus; they learned from him and preached the word of God. They tried to be as God like as they possibly could and did many good things. The first disciples were called whilst they were working. They all worked as fisherman in Galilee. There were four of them and they were Simon and his brother Andrew and James and his brother John, sons of Zebedee. All of the men were normal, ordinary every day people and were just going about their everyday lives when they were called to be disciples. Simon and his brother Andrew were the first to be called, they were catching fish with a net when Jesus approached them and said "come with me and I will teach you to capture people." By this I think he meant that he would teach them to capture the hearts and minds of people everywhere. At once the two men left their nets and went with him. Jesus travelled a little further and saw James and his brother john, sons of Zebedee they too were fishing they were in their boat getting their nets ready when Jesus called them and at once they left their father and their work and went with Jesus. ...read more.

Peter said to Jesus "look we have left everything and followed you." when Peter said this I think he was trying to say we have left everything and for what because Jesus then said to Peter and the rest of the disciples "Yes and I tell you that anyone who leaves home or brothers or mother or father or children or fields for me and for the gospel will receive much more in this present age. He will receive a hundred times more brothers, sisters, mother's children and fields- and persecutions as well; and in the age to come he will receive eternal life..." By this I think Jesus was telling the disciples that he is very grateful and that the disciples will be rewarded for their good deeds. All of Jesus` followers let him down at some point but here are two of the most well known stories in which Jesus was let down by his disciples. The first story is about when peter denied knowing Jesus and the second is about how Judas betrayed Jesus. Both of these men sinned but only one lost hope. By this I mean that although they both did wrong only one of the men had faith and kept on believing in god and that they could, in time be forgiven. ...read more.

When Jesus said this I think that what he meant was that if people chose to follow God and his Gospel not only will they be rewarded in heaven but they will also be able to perform wonderful things which will help others in a big way. The greatest commandment in relation to discipleship is as Jesus said "The most important one is this: 'Listen Israel! The Lord our God is the only Lord. Love the Lord your God with all your heart, with all your soul, with all your mind, and with all your strength'". That is the greatest commandment, and is followed by "Love your neighbour as you love yourself", Jesus rightly said "There is no other commandment more important than these two" and I think that he was and still is right. These are the key to a happy and caring life, if everybody in the world lived their lives by these commandments, what a lovely place the world would be! The disciples related to these commandments and they preached them to those who believed. The first rule of discipleship is this commandment, and it's a commandment that we should all follow in order to be a modern day disciple. ...read more.