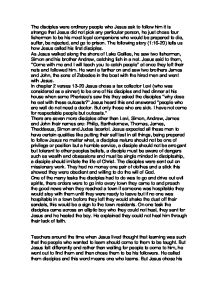 The disciples were ordinary people who Jesus ask to follow him it is strange that Jesus did not pick any particular person, he just chose four fishermen to be his most loyal companions who would be prepared to die, suffer, be rejected, and go to prison.

The disciples were ordinary people who Jesus ask to follow him it is strange that Jesus did not pick any particular person, he just chose four fishermen to be his most loyal companions who would be prepared to die, suffer, be rejected, and go to prison. The following story (1:16-20) tells us how Jesus called his first disciples. As Jesus walked along the shore of Lake Galilee, he saw two fishermen, Simon and his brother Andrew, catching fish in a net. Jesus said to them, ''Come with me and I will teach you to catch people'' at once they left their nets and followed him. He went a farther on and saw two brothers James and John, the sons of Zebedee in the boat with the hired men and went with Jesus. In chapter 2 verses 13-20 Jesus chose a tax collector Levi (who was considered as a sinner) to be one of his disciples and had dinner at his house when some Pharisee's saw this they asked the disciples ''why dose he eat with these outcasts?'' Jesus heard this and answered ''people who are well do not need a doctor. But only those who are sick. I have not come for respectable people but outcasts.'' There are seven more disciples other than Levi, Simon, Andrew, James and John their names are: Philip, Bartholomew, Thomas, James, Thaddaeus, Simon and Judas Iscariot. Jesus expected all these men to have certain qualities like putting their self last in all things, being prepared to follow Jesus no matter what, a disciples nature should not be one of privilege or position but a humble service, a disciple should not be arrogant but tolerant to other peoples beliefs, a disciple must be aware of dangers such as wealth and obsessions and must be single minded in discipleship, a disciple should imitate the life of Christ. The disciples were sent out on missionary work. ...read more.

is very important fro organisations like Cafod and Christian Aid because they make it a priority in their modern day work that the hungry should have food and those who are naked should be clothed. Cafod works all over the world tackling the problem of poverty, regardless of race or religion. Religion has become 'unfashionable� in many areas of society and things like drugs can be a barrier between a person and discipleship. But there are people who manage to become good disciples in the modern world. There are some people who make great sacrifices to follow Jesus and one example of someone who did do this is Mother Theresa of Calcutta. It is still very difficult for someone to be a modern day disciple because so many things hinder the want and possibility of being able to be one. But the rewards are still great but in a different way, and if the person�s faith is strong enough then they will not allow social attitudes to interfere with their chosen path. I think that it is extremely difficult to be a modern day disciple because many people take the modern lifestyle for granted and the mission now has a different meaning to the one in Jesus� time. I think it is difficult to relate to the Cost of Discipleship (Mark 8:27-33) in the modern world because so many people are judged by many different aspects of their lifestyle. They are usually judged in a positive way about their possessions and general lifestyle but they are judged in a negative way about their religion. Religion has become very 'unfashionable� and this is not just because it is considered a waste of time but it is also because Jesus� teaching methods were unfashionable. Today�s world is so materialistic and people would not judge someone kindly if abandoned their family responsibilities to become a disciple. Many people suggest that by living in the western world we will not suffer for our beliefs, but many people still suffer great persecution and rejection. ...read more.

(Guinness encyclopedia - extract by Dr Tim Cornell, University College London) There are many examples of modern day disciples around. One obvious choice to comment on, is a late teacher of mine, Mr John Clarke. More well known examples are easily forthcoming; Martin Luther King was a black Baptist in America. He sacrificed his life to the faith, protesting for black rights in America. He shared his cause with violent terrorist groups such as The Black Power Movement, but he chose the Christian idea of pacifism to promote his cause. He was assassinated on April 4, 1968, the day after one of his most famous speeches; "...it doesn�t matter with me now, because I�ve been to the mountain-top...I just want to do Gods� will." Discrimination against Blacks is now confined to extremist minorities, and is also illegal. Oscar Romero was the Roman Catholic Archbishop of El Salvador. The people of El Salvador had been, and sadly still are, in a state of extreme poverty, caused by the fact that in Oscar Romero�s Lifetime, 60% of El Salvador was owned by 14 families, that made up 2% of the population. They had a monopoly over the government, the police, the army, and the financial aid coming into the country. People who spoke up disappeared in the night, courtesy of the extreme right-wing death squads. Romero also spoke out, and he was assassinated in mass on 24th March 1980. His death brought the plight of El Salvador to the world. In this essay I have outlined the basic meanings and duties of discipleship, today, and at the time when Jesus lived. In a way, the challenges and dangers have not changed. Endangering your own life by fighting oppression, injustice, and going up against bigger powers, or giving your life to helping others. There are still some people today who take the faith as seriously as the first Christians do, but not many. I believe that the message has been watered down over the past 2000 years, and many today are not making the sacrifices that were demanded then. Today�s society is too materialistic. ...read more.