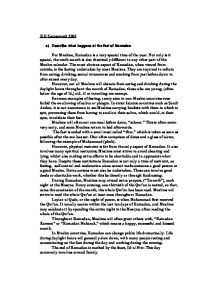 The Festival of Ramadan

R.E Coursework 2306 a) Describe what happens at the fast of Ramadan For Muslims, Ramadan is a very special time of the year. Not only is it special, the ninth month is also drastically different to any other part of the Muslim calendar. The most obvious aspect of Ramadan, when viewed from outside, is the fasting undertaken by most Muslims. They are required to refrain from eating, drinking, s****l intercourse and smoking from just before dawn to after sunset every day. However, not all Muslims will abstain from eating and drinking during the daylight hours throughout the month of Ramadan, those who are young, (often below the age of 15,) old, ill or travelling are exempt. Extreme examples of fasting, rarely seen in non-Muslim countries even forbid the swallowing of saliva or phlegm. In strict Islamic countries such as Saudi Arabia, it is not uncommon to see Muslims carrying buckets with them in which to spit, preventing them from having to swallow their saliva, which would, in their eyes, invalidate their fast. Muslims will often eat one meal before dawn, "suhoor." This is often eaten very early, and some Muslims return to bed afterwards. ...read more.

This makes it a very holy month as the Qur'an and its revelation to the prophet are the basis of the Islamic faith. Massoud Shadjareh, chairman of the London-based Islamic Human Rights Commission, stated that "The best thing for a Muslim is to continue his or her life as normal. This is the real test." This implies that a Muslim should strive to allow fasting to have as little an effect on their life as possible. However, there are some inevitable effects from fasting. It will have both positive and negative effects. Firstly it will help them learn self-discipline, which is a hugely important characteristic for a Muslim to have. Self-discipline helps Muslims abide by Allah's will, as many aspects of their lives depend on it, such as keeping prayer times and not giving in to temptations which surround us. This is especially important for Muslims in non-Islamic countries, who often also have to resist peer pressure as well as the temptation itself. Ramadan also helps Muslims have a greater appreciation of Allah's gifts to them and they will be better able to understand the plight of those less fortunate than themselves, who do not fast out of choice, but out of necessity. ...read more.

Some may argue then that fasting is the wrong thing to do as it is selfish, failing to take into account the welfare of those under a Muslim's care who may be put in danger by a famished carer. Some other may agree with this statement, saying that although fasting may teach a Muslim a degree of self-control, do we really need to deny ourselves things in order to become a better person? Surely we are defined as a person by what we do, not by what we do not; the only way to become a better person, both in the eyes of people and of God is to help those in need, not put ourselves in their position. Others may also agree that Ramadan does not have any advantages as it does not put a Muslim into the position of a person living in poverty, as they are not suffering from long term effects of malnutrition and most are guaranteed iftar and a large meal once the sun has set, something alien to those in extreme poverty. To conclude, I feel that most Muslims would disagree with this statement, as they feel that any act of Ibidah can have only advantages. However, many people may also disagree, saying that there are advantages as it develops a person's character, but it also has physical disadvantages. ...read more.