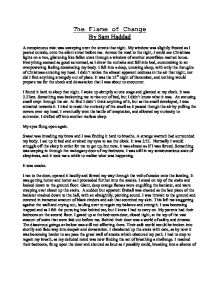 The Flame of Change.

The Flame of Change By Sam Haddad A conspicuous mist was sweeping over the streets that night. My window was slightly frosted as I peered outside, onto the silent street before me. Across the road to the right, I could see Christmas lights on a tree, glistening like fallen stars through a window of another snowflake-matted house. Everything seemed as good as normal, as I drew the curtains and fell into bed, succumbing to an overpowering feeling dominating my body. I fell into a deep, uncaring sleep, with only the thoughts of Christmas entering my head. I didn't notice the almost apparent oddness in the air that night, nor did I find anything strangely out of place. It was the 21st night of December, and nothing would prepare me for the shock and devastation that I was about to encounter. I found it hard to sleep that night. I woke up abruptly at one stage and glanced at my clock. It was 3.27am. Something was beckoning me to rise out of bed, but I didn't know what it was. An arousing smell crept through the air. At first I didn't think anything of it, but as the smell developed, I was attracted towards it. I tried to resist the curiosity of the smell as it passed though the air by pulling the covers over my head. I eventually won the battle of temptation, and allowed my curiosity to surrender. I drifted off into another restless sleep. ...read more.

It was almost as if giant, outstretched arms were beckoning us to fall into them. They flames were stealing our every inch of our living space, taking everything we owned. Destruction. My father led us into the bathroom, and opened the big, white, glazed bathroom window just above the toilet. It was our fire escape window, leading to the roof above our kitchen. I clambered though the window, closely followed by my mother. My dad had closed the bathroom door, jumped up on the toilet back and forced his way through the window, which was pretty hard for him, seeing it was relatively small window. No sooner then all of us had settled on the roof, distant sirens could be heard, making their way towards us. My mind's elation set by the ever-closer feeling of Christmas was growing overcast by the minute and I was finding it hard to concentrate on our situation. Here we were, sitting above our home, where beneath us, a raging fire of torment was destroying any hope of a peaceful Christmas. There was nothing we could do but sit and wait. Neighbours gathered upon streets gripped with inquisitiveness and sympathy, watching us as we were hoisted out onto our front garden with the aid of two firefighters. After the initial shock had settled in, we were taken to the hospital to be treated for any injuries or trauma we may have suffered from. The overwhelming aspect of our situation had finally sunken in, and it was obvious now this was going to be an extraordinary Christmas. ...read more.

I feel loneliness, seclusion and frustration but the darkest day is now over. I can escape the wilderness of restlessness to a better path and a better existence, knowing that one thing is true. We must not succumb to the complacency that we are all starting to fall victim for. If this is done, we can all control our lives for the better. My synopsis of life has now changed. Everything that I took for granted back then, all means so much to me now. Memories, which I will never forget, will always be treasured, and some will haunt me for life. But, above all, it is clear now that above all in this world your family is more important then anything, and they are the ones that will help you through times of need. I still think to myself, it was me who had let this happen. I could have stopped it if I wanted to in the early stages of that night, but my selfishness had got the better of me. But, then again, I thank myself for letting my curiosity and intuition overcome my mind and body eventually, and letting me act as I did. It was a day of misunderstanding, but no one was to blame. After all it did not matter that we had no house for Christmas but at least we had our family. Your family is the one thing that matters most and we must not let the superficiality of life get the better of us. The greatest thing we will ever learn, it just to love, and to be loved in return. I have learnt that lesson and I have changed. ...read more.