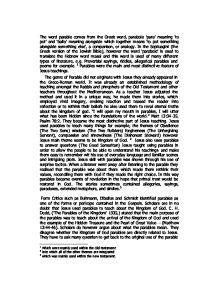 The genre of Parable did not originate with Jesus they already appeared in the Greco-Roman world.

The word parable comes from the Greek word, parabole 'para' meaning 'to put' and 'ballo' meaning alongside which together means 'to put something alongside something else', a comparison, or analogy. In the Septuagint (the Greek version of the Jewish Bible), however the word 'parabole' is used to translate the Hebrew word masal and this word is used of many different types of literature, e.g. Proverbial sayings, riddles, allegorical parables and poems for example. 1 Parables were the main and most distinctive feature of Jesus teachings. The genre of Parable did not originate with Jesus they already appeared in the Greco-Roman world. It was already an established methodology of teaching amongst the Rabbis and phrophets of the Old Testament and other teachers throughout the Mediterranean. As a teacher Jesus adjusted the method and used it in a unique way, he made them into stories, which employed vivid imagery, evoking reaction and teased the reader into reflection or to rethink their beliefs he also used them to reval eternal truths about the kingdom of god. "I will open my mouth in parables, I will utter what has been hidden since the foundations of the world." Matt 13:34-35, Psalm 78:2. They became the most distinctive part of Jesus teaching. Jesus used parables to teach many things for example, the themes of Obedience (The Two Sons) wisdom (The Two Builders) forgiveness (The Unforgiving Servant), compassion and shrewdness (The Dishonest Steward) however Jesus main theme seems to be Kingdom of God. 2 Jesus also uses parables to answer questions (The Good Samaritan) Jesus taught using parables in order to allow the people to be able to understand his teachings and make them easy to remember wit his use of everyday language and familiar scenes and intriguing plots. Jesus skill with parables was shown through his use of surprise tactics. When a listener went away after listening to the parable they realised that the parable was about them which made them rethink their values, reconciling them with God if they made the right choice. ...read more.

It seems that through Jesus use of parables there was an invitation to conversion into a new way of living so that God could be accepted on a personal level. They are allowing themselves personal entrance to the Kingdom that can be taken now on a personal and social level and fulfilled by everyone else latter. Jesus used his parables to teach about Judgement. He used parabolic images such as the Sheep and the Goats to show that on the when they are judged the good and the bad will be sorted and those who accepted Jesus and did good to their Neighbours would attain the Kingdom of heaven "He will put the sheep on his right and the goats on his left." (Matthew 25:33) Jesus through his parables tried to get the message across that a new approach was now needed he reinterpreted what traditional Jewish thought was about the coming of the kingdom. Jesus used the parables to teach that if you were truly sorry for your sins that the lord would forgive you and only once you had repented could you achieve salvation and enter the Kingdom of God. This is shown in The Parable of The Unforgiving Servant. Matt 18:21-35. Jesus intended his hearers to accept him as their Messiah' and repent and so then through his death they will also achieve salvation within the New Kingdom. Which can only be realised fully when the Messiah comes and brings with him the kingdom and suffers death (according to Isaiah 53) However we must consider if Jesus was actually teaching about himself as the redeemer or God. Many scholars believe that Jesus did teach the parables but in the context of God (Theo centric) rather than through the context of himself (christo centric). (Some say that the christo centric element was added by the evangelists in light of the resurrection, this would have been used to fit the audience and purposes of the evangelists.) ...read more.

did the evangelists or church adapt the parables to make it appear Jesus knew he was he Messiah and the kingdom is coming because the purpose of the gospels is to spread the good news of Jesus and lead people to believe in him so if they want their gospel to sound plausible they needed to make the events fit their purpose. In order to draw conclusiuon about the ways in which Jesus used parables in his teachings we must know that the parables are original to Jesus if we can accept that what is in the gospels is the teaching of Jesus. We can then say Jesus used them in different ways, to preach salvation and forgiveness for example. To tell of impending Judgement and most importantly to proclaim the forth coming kingdom (as the messiah) which had arrived already not partially (inaugurated) and then when the parouisia comes the kingdom will be realised fully. This understanding has been formulated by scholars and is most universally accepted. To know whether the parables were from Jesus repertoire or not does affect the fact that they are timeless forms of literature, which had significance 2000 years ago but still are of major significance to many people in the world now. 1 Which were mainly used within the Old testament 2 Into which all of the other themes are integrated 3 which was mainly used within the new testament. 4 "All the nations will be gathered before him, and he will separate the people one from another as a shepherd separates the sheep from the goats". 5 (according to the Mark, Jesus asked [the disciples], "But who do you say that I am?" Peter answered him, "You are the Messiah." And he sternly ordered them not to tell anyone about him. Mark 8:29-30) 6 "Well then, you should have put my money on deposit with the bankers, so that when I returned I would have received it back with interest.") which means he made no preparation. ...read more.