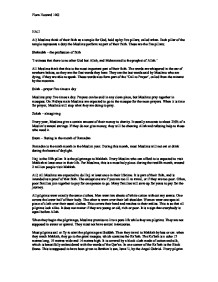 HAJJ Ai) Muslims think of their faith as a temple for God, held up by five pillars, called arkan. Each pillar of the temple represents a duty the Muslims perform as part of their faith. These are the five pillars: Shahadah - the profession of faith `I witness that there is no other God but Allah, and Muhammad is the prophet of Allah.' All Muslims think that this is the most important part of their faith. The words are whispered in the ear of newborn babies, so they are the first words they hear. They are the last words said by Muslims who are dying, if they are able to speak. These words also form part of the 'Call to Prayer', called from the minaret by the muezzin. Salah - prayer five times a day Muslims pray five times a day. Prayers can be said in any clean place, but Muslims pray together in mosques. On Fridays male Muslims are expected to go to the mosque for the noon prayers. When it is time for prayer, Muslims will stop what they are doing to pray. Zakah - almsgiving Every year, Muslims give a certain amount of their money to charity. It usually amounts to about 21/2% of a Muslim's annual savings. If they do not give money, they will be cheating Allah and refusing help to those who need it. Saum - fasting in the month of Ramadan Ramadan is the ninth month in the Muslim year. During this month, most Muslims will not eat or drink during the hours of daylight. Hajj is the fifth pillar. It is the pilgrimage to Makkah. Every Muslim who can afford to is expected to visit Makkah at least once in their life. For Muslims, this is a most holy place. during the twelfth month, around 2 million people visit Makkah. Aii) All Muslims are expected to do Hajj at least once in their lifetime. ...read more.

They accepted that if it was God's will it had to be done. The family set out for Mina, the place of sacrifice. On the way, the devil appeared in human form and used various reasonable arguments to persuade Ibrahim the dream was not genuine. Ibrahim ignored him and picked up stones to throw at the devil and drove him away. This is why Muslims throw stones at the three columns. In a barren, waterless desert, God tested Hajar and Isma'il, Ibrahim's second wife and son. They were dying of thirst. Hajar ran between the tops of two hill, Safa and Warwah, seven times to see if she could spot a camel train that had water. At last, when all of her hope had gone, except that of God, the angel Jabrill appeared and showed her a spring at the feet of her suffering child. This is the spring now known as the Zamzam well. Pilgrims now run backwards and forwards seven times between the two mountains, and then drink from the well and give water from it to their friends and families. When Muslims perform their prayers, they always face in the direction of the Ka'bah. Wherever they are, they will stop to pray and they will know which way to face. If they are near a mosque, there is a special place in its walls to show them which way to face. Away from a mosque, some Muslims use a prayer mat with an inbuilt compass. The spiritual meaning of Hajj is to make the pilgrim feel at one with God. When they perform the tasks, they know they are repeating the actions of significant people in their belief. When they are on the mountain, meditating for a day, they feel especially close to God. Bii) Nowadays, there are several problems that arise from taking Hajj. When it was established, there were fewer Muslims in the world. Now there are millions more. About 2 million people visit Makkah in the twelfth month. ...read more.