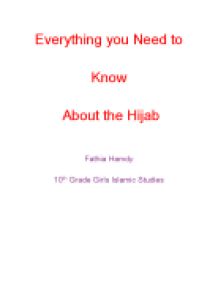 The Hijab is not a political flag, nor a sign of extremism. Its a symbol of self-respect and modesty

﻿Everything you Need to Know About the Hijab Fathia Hamdy 10th Grade Girls Islamic Studies In the world we live in today, Muslims are being watched through a very negative eye. The common misconception is that we are terrorists, who are obsessed with the idea of killing innocent people in the name of our God. Muslim men are accused of oppressing their wives by forcing them to fully cover up and wear a Hijab in public. The sight of fully dressed women wearing headscarves does not add to the positive image of Islam in the West. There are many reasons why people think we as Muslim women wear the scarf. Some believe that we are oppressed, uneducated, or terrorists. However, all these conceptions of the Hijab are false and greatly misleading. First of all, what is the Hijab? The Hijab is simply a piece of cloth which covers a woman?s hair, neck and bosom. ...read more.

For men, the awrah is from the naval to the knees. Both men and women are prohibited from wearing tight clothing, or clothing that imitates the opposite gender. Muslim females are commanded to apply the Hijab when they reach puberty. This is supported in the hadith of the Prophet Muhammad (SAW) that says: ?Aisha (R) narrated that Asma', daughter of Abu Bakr, entered upon the Prophet Muhammad (SAW) wearing thin clothes. Prophet Muhammad turned his attention away from her. He said: O Asma', when a woman reaches the age of menstruation, it does not suit her that she displays her parts of the body except this and this, and he pointed to her face and hands.? (Abu Dawud ). This means that when a Muslim women reaches puberty, it is an obligation upon her to apply the Hijab, or by at least dressing modestly and in a way that covers their awrah. ...read more.

The Hijab also increases purity in the heart, because it prevents the gaze of the man from the women, therefore preventing any inappropriate thoughts. The Hijab gives a women a clean reputation, and protects the woman because it covers her from those who might harm her. It also increases one's taqwa, and is a means of covering from Allah SWT. What more does one want if they are being covered by the mercy of Allah? The Hijab is not a political flag, nor a sign of extremism. It?s a symbol of self-respect and modesty, and an act of obedience towards God. Our Lord has commanded us to guard ourselves only for the purpose of our protection, so why should we not follow his command and benefit from it? Muslim women may have been insulted and discriminated against because of their Hijab, but our faith in Allah is stronger than all the insults that come towards us, and we will continue to represent our faith through the dress of our Hijab. ...read more.