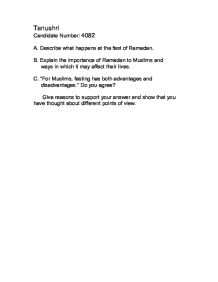 The Importance of Ramadan

self-restraint,"Quran 2:18 and generosity. This quote from the Quran is a demand from Allah, making fasting very important in Islam. Ramadan is very important to Muslims, it is the fourth of the 5 pillars of Islam explicitly mentioned in the Quran. 'You who believe, fasting has been prescribed for you, just as it was prescribed for those before you, so that you may do your duty on days that have been fixed.' This indicates that it is a Muslims duty to fast, just as many Muslims did before them and will do after them. Another reason Ramadan is important to Muslims is experiencing Ummah, a sense of brother-hood through shared 'ordeals'. It brings the feeling of togetherness by praying together in a mosque and also in the sense that both the rich and poor fulfill the same demands of the fast, and are all going through the same thing together. This should also make them more generous towards them. Ramadan is also important for Muslims because it is believed to be the month during which the holy Qur'an was revealed by God to Mohammed. Ramadan might affect a Muslims life by them becoming more holy and spiritual and geting closer to God, they will have a better self-discipline of them selves, they will stop and think about what they do in the future like committing any bad sins or deeds e.g. stealing; they might start to care about poor people and not put food to waste and also by Muslims fasting and not doing any bad deeds they might get closer to God. It makes them feel that they have fulfilled a requirement which is the fourth pillar of Islam which is sawm (fasting). Some Muslims seek Allah's forgiveness and protection in this month. This is the month for some Muslims to renew their commitment and re- establish their relationship with Allah. It is like the spring season for goodness and righteousness. ...read more.

It helps one to feel compassionate for those who are less fortunate and underprivileged, since each day one will feel greater appreciation for what he/she has a result of feeling hunger, thirst and the desire to smoke. It offers a time for Muslims to 'purify' their bodies as well as their souls, by developing a greater sense of humility, spiritually and community. Ramadan is a very spiritual time for Muslims. However, I still believe that there are disadvantages that go with it, like the pressure to feel that you have to fast to show that you are devoted to your faith, even when it is not necessary. For example, someone who is anaemic knowing that they do not have to fast, but doing to show that they are still devoted to Islam. Although in the long term they will be affecting their health and could get much worse as a result of it. Temptation in school is also an issue. Children are going to find it hard to have to watch their friends eat, knowing that they cannot eat themselves. Another issue in schools is finding the time and a clean, peaceful place to pray. If the school does not provide the student with a place to pray it means that they have not done their five prayers, that is required of them during Ramadan. Although, some people might agree that Ramadan is a disadvantage because hunger and the thirst can be agonizing and you have to try really hard to follow the rules of fasting e.g. no swearing, smoking or taking drugs. Overall for a Muslim, the spiritual benefits of fasting outweigh the physical disadvantages. For a Muslim fasting is about showing their devotion to Allah and purifying themselves. Even though fasting may mean they loose a bit of weight, or they have to make up for the prayers they have missed during school or work, they don't mind as long as they have done their fast and know that they are still committed to Allah and the Islamic faith. Pg 9 ...read more.