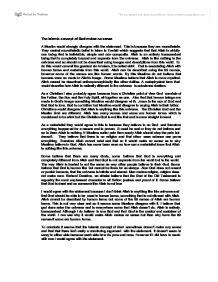 The Islamic concept of God makes no sense

The Islamic concept of God makes no sense A Muslim would strongly disagree with the statement. This is because they are monotheists. They central monotheistic belief in Islam is Tawhid which suggests that that Allah is strictly one being that is indivisible, simple and non-composite. Allah is an entirely transcendent being that is completely beyond and separate from the universe. Allah is like nothing in the universe and so should not be described using images and descriptions from this world. To do this would commit the greatest sin in Islam, it is called shirk. That is associating Allah with human terms and materials from this world. Allah can be described using the 99 names, however some of the names are like human words. ...read more.

As a materialist they would agree to this is because they believe in no God and therefore everything happened for a reason and is proven. It must be real or they do not believe and so to them Allah is nothing. If Muslims suffer pain then surely Allah should stop the pain but doesn't. They believe that there is no religion and that other sees science can prove everything. Therefore Allah cannot exist and that so it would make no sense as to why Muslims believe in God. Allah has never been seen so how can a materialist know that Allah is nothing like this universe. Some believe that there are many Gods, some believe that God is everything and completely different from Allah and that God is not separate from the world but is the world. ...read more.

Allah cannot be described by human terms but some of the 99 names of Allah are human terms. This is not very clear and so it seems some Muslims disagree with it. I believe that god does enter the universe and is everywhere some that Allah doesn't do, Allah is entirely transcendent. Although I do believe in one God and that God is the creator and sustainer of the world. I can see why it would make Allah makes no sense but then why have the 99 names if some are human terms. To conclude it seems that the Islamic concept of God sometimes doesn't make any sense and that that there isn't really a convincing argument with the statement. It doesn't seem to sway to either side because each side how its pros and cons. However if I did have to reach with one I would agree with the statement. ...read more.