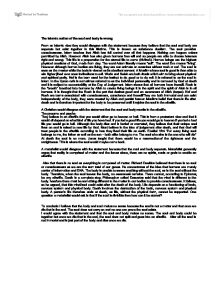 The Islamic notion of the soul and body is wrong

The Islamic notion of the soul and body is wrong From an Islamic view they would disagree with the statement because they believe that the soul and body are separate but exist together in this lifetime. This is known as substance dualism. The soul provides consciousness. Islam teaches that Allah has full control over all that happens. Nothing can happen unless permitted by Allah. However Allah has also given humans free will and so people are able to choose between right and wrong. This life is a preparation for the eternal life to come (Akhirah). Human beings are the highest physical creations of God, made from clay. The word Adam literally means "soil". The word Eve means "living". However although human bodies are living, they are not animate or conscious without ruah or naf. The soul is seen as the master while the body is viewed as its obedient servant. A Muslim whose soul is good is then able to win higher jihad over ones inclinations to evil. ...read more.

A Christian would disagree with the statement that the soul and body reunite in the afterlife. The pneuma and psyche They believe in an afterlife that you would either go to heaven or h**l. This is from a protestant view and that it would all depend on what kind of life you have had. If you led a good life you would go to heaven if you led a bad life you would go to h**l. Although the body dies and is buried or cremated, they believe that their unique soul lives on and is raised to new life by God. Most believe in the idea of judgement after death, and that God will treat people in the afterlife according to how they lived their life on earth. Ezekiel 18:4 "For every living soul belongs to me, the father as well as the son - both alike belong to me. The soul who sins is the one who will die" At death the soul is no more. ...read more.

herefore there must be something different to the matter in our bodies to provide consciousness. It follows, so he argued, that this mind/soul could exist after the death of the body. Life depends on a functioning of brain, nervous system and physical body. Death involves the destruction of the brain, nervous system and physical body. A person's life therefore ends at death, as life, without the physical form, cannot be supported. One question a materialist would ask is that If the soul is divisible then how can it be eternal? To conclude I believe that the body and soul makes no sense because the soul is not a matter and that once we die that is the end. The soul does not carry on and no one can prove the soul exists. I would agree with the statement and that the soul and body makes no sense. The soul and body could be together but once we die that is the end, the soul does not split and goes into an afterlife. After all the soul is not immortal and is just part of the body and dies once we die. ...read more.