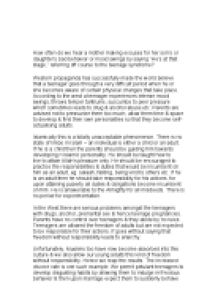 The Islamic View of Teenagers

﻿How often do we hear a mother making excuses for her son?s or daughter?s bad behavior or mood swings by saying ?He?s at that stage,? referring off course to the teenage syndrome? Western propaganda has successfully made the world believe that a teenager goes through a very difficult period when he or she becomes aware of certain physical changes that take place. According to the west a teenager experiences intense mood swings, throws temper tantrums, succumbs to peer pressure which sometimes leads to drug & alcohol abuse etc. Parents are advised not to pressurize them too much, allow them time & space to develop & find their own personalities so that they become self-actualising adults. ...read more.

He should be encouraged to practice the responsibilities & duties that would be incumbent on him as an adult, eg: salaah, fasting, being kind to others etc. If he is an adult then he should take responsibility for his actions, for upon attaining puberty all duties & obligations become incumbent on him. He is answerable to the Almighty for all misdeeds. There is no period for experimentation. In the West there are serious problems amongst the teenagers with drugs, alcohol, premarital sex & hence teenage pregnancies. Parents have no control over teenagers & they abide by no rules. ...read more.

How can we possibly expect two selfish & self-indulging individuals to live in harmony & build a strong marital bond & above all raise children? We must awake the realisation that parents must teach their children the rudiments of Islam in their early years & make them well aware that they will be held accountable for all deeds & actions upon attaining puberty. Children must be given clear directives that the purpose of our existence on earth it to attain Allah?s pleasure only. To tolerate or encourage this so-called teenage period with all it?s self-indulgent tantrums would without question exacerbate our currents problems & eventually weaken the Ummah. ...read more.