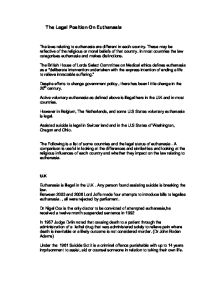 The Legal Position On Euthanasia around the World.

The Legal Position On Euthanasia The laws relating to euthanasia are different in each country. These may be reflective of the religious or moral beliefs of that country. In most countries the law categorises euthanasia and makes distinctions. The British House of Lords Select Committee on Medical ethics defines euthanasia as a "deliberate intervention undertaken with the express intention of ending a life to relieve intractable suffering." Despite efforts to change government policy , there has been little change in the 20th century. Active voluntary euthanasia as defined above is illegal here in the U.K and in most countries. However in Belgium, The Netherlands, and some U.S States voluntary euthanasia is legal. Assisted suicide is legal in Switzerland and in the U.S States of Washington, Oregon and Ohio. The Following is a list of some countries and the legal status of euthanasia . A comparison is useful in looking at the differences and similarities and looking at the religious influences of each country and whether they impact on the law relating to euthanasia. ...read more.

Turkey's law on euthanasia are a direct reflection of the beliefs of the majority Of Turkey's population . As it is a Muslim country and Muslims believe that it is a sin to take one's own life as God granted that life only he should take it. It follows that they would be totally opposed to the idea of euthanasia. United States Active euthanasia is illegal in most states of the U.S . Patients have the right to refuse medical treatment, or choose pain management that will hasten their death therefore passive euthanasia is legal. Assisted suicide is legal in Washington Oregon and Montana. It can be clearly seen that in some countries religious influences are very strong and directly impact on the laws relating to euthanasia. For example Turkey is a Muslim country and Islam does not permit suicide or euthanasia . The laws in that country reflect the religion of the majority and treat euthanasia as they would murder ,punishable by life imprisonment. In Israel euthanasia is illegal and according to Jewish laws not accepted at all as it is against the teachings of Juddaism. However there has been a movement towards more lenient views under certain circumstances in Israeli law. . ...read more.