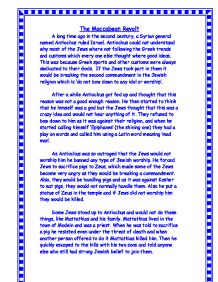 The Maccabean Revolt A long time ago in the second century, a Syrian general named Antiochus ruled Israel. Antiochus could not understand why most of the Jews where not following the Greek trends and customs which every one else thought where good ideas. This was because Greek sports and other customs were always dedicated to their Gods. If the Jews took part in them it would be breaking the second commandment in the Jewish religion which is 'do not bow down to any idol or worship'. After a while Antiochus got fed up and thought that this reason was not a good enough reason. ...read more.

He forced Jews to sacrifice pigs to Zeus, which made some of the Jews become very angry as they would be breaking a commandment. Also, they would be handling pigs and as it was against Kosher to eat pigs, they would not normally handle them. Also he put a statue of Zeus in the temple and if Jews did not worship him they would be killed. Some Jews stood up to Antiochus and would not do these things, like Mattathias and his family. Mattathias lived in the town of Modein and was a priest. When he was told to sacrifice a pig he resisted even under the threat of death and when another person offered to do it Mattathias killed him. ...read more.

In their attacks they used manly guerrilla warfare tactics and they all paid off as they where able to recapture their temple. They firstly set to work destroying the statue of Zeus, and cleaning and cleansing the temple. After this was done they where ready to rededicate it to God. They then lit the Monorah (a lamp always alight in a temple) which showed the presence of God but there was only enough sacred oil for one day. Setting off they went to get some more of the oil and by the time they got back it had been eight days. Miraculously the candles where still burning and this is thought to show that even though they had killed people they had done the lesser of two evils to save their religion. ...read more.