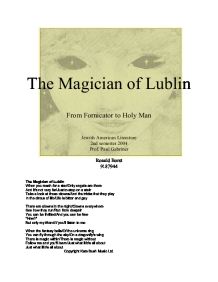 The Magician of Lublin.

The Magician of Lublin From Fornicator to Holy Man Jewish American Literature 2nd semester 2004 Prof. Paul Gabriner Ronald Borst 9187944 The Magician of Lublin When you reach for a star/Only angels are there And it's not very far/Just to step on a stair Take a look at those clowns/And the tricks that they play In the circus of life/Life is bitter and gay There are clowns in the night/Clowns everywhere See how they run/Run from despair You can be thrilled/And you can be free "How?" But only my friend/If you'll listen to me When the fantasy bells/Of the universe ring You can fly through the sky/On a dragonfly's wing There is magic within/There is magic without Follow me and you'll learn/Just what life's all about Just what life's all about Copyright Kate Bush Music Ltd. In this essay I want to examine to what extent the main protagonist of The Magician of Lublin, Yasha Mazur, struggles with the ethical values of the Jewish religion, reluctantly being a Jew himself, and the final acceptance and embrace of his forefather's heritage. These values, as Gabriner has shown us in this course on American Jewish literature, permeate the Jewish culture and hence the work of the authors we have read and discussed. After a summary of the novel's content and its implications I will endeavour to draw parallels and seek contrasts between the various characters in this novel and The Slave, by the same author, while I will also attempt to do the same with some of the other works that were incorporated in this course. Finally, I cannot escape a thoroughly motivated categorization. The Magician of Lublin is a novel by Isaac Bashevis Singer which was published serially as Der Kuntsnmakher fun Lublin in the Yiddish-language daily newspaper Forverts in 1959 and published in book form in English in 1960. The entire novel did not appear in Yiddish in book form until 1971. ...read more.

"Yasha stepped up onto the sidewalk and saw the courtyard of a synagogue. The gate stood open. An elderly Jew entered, prayer-shawl bag under his arm. Yasha darted inside. Here they will not search", he thought (170). The synagogue, as mentioned above, is an island of order in the sea of his disordering activities. His worries recede before the act of constitutive prayer. "The men put on their prayer shawls and their phylacteries, they affixed the thongs and cloaked their heads, and he watched with astonishment as if he, Yasha, were a Gentile who had never witnessed this before"(173). Yasha becomes both observer and participant and has to rediscover his communal self. Again the words of the benedictions sound "strangely alien yet strangely familiar"; Yasha discovers not only the echoes in his heart of these traditional prayers but loses most of his modern skepticism. "He translated the Hebrew words and considered each one. Is it truly so? He questioned himself. Is God really that good?"(173) Remembering his father, the meanings of the words return:"... He continued his prayers, translating the Hebrew words to himself, 'Blessed be He who spake and the world existed, blessed be He who was the maker of the world in the beginning. Blessed be He who speaketh and doeth. Blessed be He who decreeth and performeth. Blessed be He who hat mercy upon the earth and payeth a good reward to them that fear Him.'" Then Yasha has a change of heart: "Aghast at the extent of his degradations and, what was perhaps worse, his lack of insight," he acknowledges how close he had been "from the final plunge into the bottomless pit," and discovers compassionate forces in what had led him to the house of study and worship: "He chanted 'Hear O Israel' and cupped his eyes with his hand. He recited the Eighteen Benedictions, contemplating every word. The long-forgotten childhood devotion returned now, a faith that demanded no proof, an awe of God, a sense of remorse over one's transgressions" (177). ...read more.

It is suggested that a parallel can be drawn between the alienation Jacob and Yasha feel in their respective essentially unfamiliar environments and Singer's own private feelings to this matter. The same can be attributed to the lure these non-Jewish women present to them; maybe this lure reflects a sentiment Singer may have felt towards his own wife, Alma, who came from a completely assimilated, non-Yiddish-speaking family. Malamud's Sy Levin and Levin Freeman also are fascinated with non-Jewish women, although Freeman only supposes she is non-Jewish, in which he is grossly mistaken. Judaism, for Singer, meant the orthodoxy he had known at home; his father was a rabbi. Yet, he was married to a woman who could neither understand his language nor could she fully comprehend his religious struggles.1 In that sense we are reminded of the totally honest and sincere Emilia, who wishes Yasha's conversion to Christianity, completely ignorant of his struggle with being a Jew, which is completely juxtaposed to Wanda's conversion to Judaism. Magda's suicide was explained by Singer in 1983 as a result of her anti-Semitic comment to Yasha: "You dirty Jew!" (199) A comment, she must have realized, he would never forgive her2. This harsh view also characterizes the way the Jewish people view themselves and which is also evident from the harsh measures Yasha takes with his self-imprisonment. The man who was his own best trick, who held the key to all hearts while his own was full of confusion, who knows who he should be only to be lost again, no longer exists. The magician who "was always a stranger, amongst the Jews as well as Gentiles", who contrary to other people who "had their God, their saints, their leaders" while "he had only his doubt" has come home (23). The Magician of Lublin, clearly and not surprisingly, has to be categorized as a type "A" text. All the above shows that it is identifiably Jewish on the surface level as well as the thematic level. ...read more.