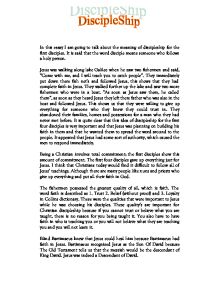 The meaning of discipleship for the first disciples.

In this essay I am going to talk about the meaning of discipleship for the first disciples. It is said that the word disciple means someone who follows a holy person. Jesus was walking along lake Galilee when he saw two fishermen and said, "Come with me, and I will teach you to catch people". They immediately put down there fish net's and followed Jesus, this shows that they had complete faith in Jesus. They walked further up the lake and saw two more fishermen who were in a boat. "As soon as Jesus saw them, he called them", as soon as they heard Jesus they left there father who was also in the boat and followed Jesus. This shows us that they were willing to give up everything for someone who they knew they could trust in. They abandoned their families, homes and possessions for a man who they had never met before. It is quite clear that this idea of discipleship for the first four disciples is very important and that Jesus was planning on building his faith in them and that he wanted them to spread the word around to the people. It appeared that Jesus had some sort of authority, which caused the men to respond immediately. ...read more.

These Christians spread the word and teach other people. These are also the people who give up everything. Seeds 2-3 can be compared to the story of the Widows Offering, seeds2 and 3 are compared to the Rich man who puts a large amount of money into the collection box whereas seeds 4 who is compared to the old widow, puts all that she has in the collection. It is clear that seeds 4 are offering more because they are giving all they have got. The Rich Man story states that in some cases some people will find it impossible to join the Kingdom Of God because of everything they have to give up. Jesus says to the disciples that it is harder for some people to give up everything. What the Rich Man does not understand is that he will inherit so much more if he is in the Kingdom Of God. The Rich Man could not put God as number one priority; it was obvious that his number one priority was to stay wealthy. This is where most Christians find that they do not posses enough faith. The Rich Man cannot enter the Kingdom Of God until he gives up everything and puts his complete faith in God. This story can be compared to the Parable Of The Sower. ...read more.

Most Jews thought the Messiah would sit on the throne once he had defeated the Romans. But Jesus saw the Kingdom in terms of suffering and told them to be prepared to suffer like him. "You don't know what you are asking for. Can you drink the cup of suffering that I must drink? Can you be baptised in the way I must be baptised?" (10:38). Jesus often used a cup to represent suffering. Baptism also represents suffering. When someone is baptised they give up an old way of life, to start another. Jesus corrects the disciples about greatness. Jesus says to the disciples that if you want to be the first to the Kingdom Of God you have to be a "Servant To All". In this account Jesus showed his power over the forces of nature. He calmed a storm. Jesus and the disciples set sail in a boat. During their travels a storm occurred. Waves blew over into the boat while Jesus was asleep. The disciples in disbelief saw Jesus still asleep. They woke Jesus and said to him, "Teacher, do you not care that we are about to die". Jesus then stood and called for the storm to stop. It stopped and Jesus answered, "Why are you frightened, do you have no faith?". ?? ?? ?? ?? ...read more.