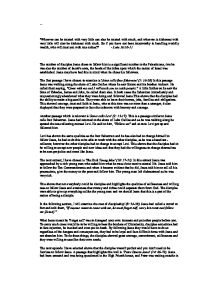 The meaning of discipleship.

The meaning of Discipleship - R.E. Kit Calcott-James "Whoever can be trusted with very little can also be trusted with much, and whoever is dishonest with very little will also be dishonest with much. So if you have not been trustworthy in handling worldly wealth, who will trust you with true riches?" - Luke 16:10-11 The number of disciples Jesus chose to follow him is a significant number to the Palestinians, twelve was also the number of Jacob's sons, the heads of the tribes upon which the nation of Israel was established. Jesus may have had this in mind when he chose his followers. The first passage I have chosen to examine is 'Jesus calls four fishermen' (1: 16-20) In this passage Jesus was walking along the shore of Lake Galilee where he saw Simon and his brother Andrew. He called them saying, "Come with me and I will teach you to catch people." A little further on he saw the Sons of Zebedee, James and John, he called them also. ...read more.

The next extract, I have chosen is 'The Rich Young Man' (10: 17-31). In this extract Jesus was approached by a rich young man who asked him what he must do to receive eternal life. Jesus told him to follow the Ten Commandments and when it became evident that he did, Jesus told him to sell all his possessions, give the money to the poor and follow him. The young man left disheartened as he was very rich. This shows that not everybody could be disciples and highlights the qualities of selflessness and willing ness to follow Jesus and awareness that money and riches could separate them from God. The disciples were able to give up everything unlike the young man and we should learn that this is a part of the nature of being a disciple. In the following section, I will examine the cost of discipleship' (8: 34-38). Jesus had called a crowd to him and told them, "If anyone wants to come with me, he must forget self, carry his cross and follow me [Jesus]." ...read more.

Just as he denied Jesus for the third time, a cock crew and Peter remember Jesus' prediction and he ran off and wept. Peter, understandably enough, has shown fear and a lack of courage. He has been disloyal and showed a lack of true friendship. This was a very hard time for Peter and he has failed but he remained the chief disciple. This shows that to follow Jesus you need not be perfect and though you may fail from time to time Jesus understands and forgives. Disciples don't have to be infallible. After analysis of the passage above I have come to the following conclusions about the nature of discipleship: disciples either today or in the time of Jesus need many qualities; most of all courage, commitment, faith, trust, willingness to leave everything, selflessness, and conviction to name but a few, however as Peter shows us sometimes we fail but this is alright, none of us are perfect and God doesn't expect us to be, so even if we do fall short, we can still be welcomed as a follower of Christ. ...read more.