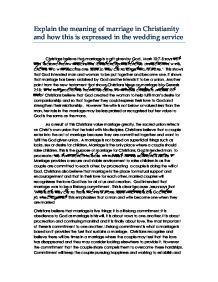 Explain the meaning of marriage in Christianity and how this is expressed in the wedding service Christians believe that marriage is a gift given by God. Mark 10:7-8 says 'For this reason a man will leave his father and mother and be united to his wife, and the two will become one flesh. So they are no longer two, but one.' This shows that God intended man and woman to be put together and become one. It shows that marriage has been ordained by God and he intends it to be a union. Another point from the new testament that shows Christians views on marriage is in Genesis 2:18: 'It is not good for the man to be alone. I will make a helper suitable for him' Christians believe that God created the woman to help fulfil man's desire for companionship and so that together they could express their love to God and strengthen their relationship. However the wife is not below or valued less than the man, her role in the marriage may be less praised or recognised but her value to God is the same as the mans. ...read more.

The most important of these is commitment to one another. Lifelong commitment is what a marriage is based on it provides the fuel that sustains a marriage. Christians recognise and believe there will be times in a marriage where the couple may feel that the love has disappeared and they may consider looking elsewhere to provide it. However the commitment that the couple share compels them to overcome these hardships. Commitment will keep the couple pursuing happiness and working to establish and maintain a successful relationship, in which they can learn to love each other and God. The Christian wedding service expresses many of these views on marriage. The marriage is about sharing your life completely with your partner. It is about having and caring for children. The ceremony celebrates the beginning of a relationship together forever. This is what 'the vows' mean. They are made to each other in front of God and God blesses them. At the start of the ceremony the priest will acknowledge that the act of marriage is a gift from God and will explain to the couple that marriage is a union that is intended by God to be lifelong. ...read more.

The rings symbolise eternity, that the couple are committed to each other forever. They also show that the person is married and so is not available for sexual or marital relationships with another person. Finally prayers are said to ask God to guide the couple through their marriage. Christians believe that God is the creator, preserver and destroyer and so by keeping him at the heart of their marriage he will strengthen the couples relationship's and will keep them together. Different denominations of Christianity have slightly different views about marriage. The Catholic church believes that marriage is a sacrament, something spiritually happens when a couple get married that binds them together. In Mark 10:9 he said 'let no person separate what God has spiritually joined together'. This is saying that the 'sacrament' should not be broken and that is why Catholics believe marriage is important. Because of this Catholics consider divorce as a sin, something which is not recognised by God. The Church of England believes that marriage is important because it is a covenant, an agreement by two people who want to share the rest of their lives together because they love and are committed to each other. ...read more.