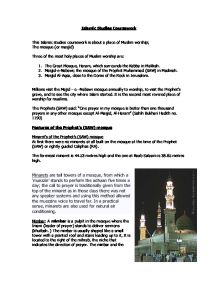 Islamic Studies Coursework This Islamic studies coursework is about a place of Muslim worship; The mosque (or masjid) Three of the most holy places of Muslim worship are: 1. The Great Mosque, Haram, which surrounds the Kabba in Makkah. 2. Masjid-e-Nabawi; the mosque of the Prophet Muhammad (SAW) in Madinah. 3. Masjid Al-Aqsa, close to the Dome of the Rock in Jerusalem. Millions visit the Majid - e -Nabawi mosque annually to worship, to visit the Prophet's grave, and to see the city where Islam started. It is the second most revered place of worship for muslims. The Prophets (SAW) said: ''One prayer in my mosque is better than one thousand prayers in any other mosque except Al-Masjid, Al-Haram'' (Sahih Bukhari Hadith no. 1190) Features of the Prophet's (SAW) mosque Minaret's of the Prophet's (SAW) mosque At first there were no minarets at all built on the mosque at the time of the Prophet (SAW) or rightly guided Caliphas (RA). The foremost minaret is 44.53 metres high and the one at Baab Salaam is 38.85 metres high. Minarets are tall towers of a mosque, from which a 'muezzin' stands to perform the adhaan five times a day; the call to prayer is traditionally given from the top of the minaret as in those days there was not any speaker systems and using this method allowed the muezzins voice to travel far. In a practical sense, minarets are also used for natural air conditioning. ...read more.

The Imam must be: Leader in prayer - The imam is the person who stands in front of the lines of worshippers, faces the Qiblah, leading them in the recital of the 5 daily Salah. On Fridays the imam conducts the jumah (Friday prayer) and also gives two sermons about religious and social matters therefore he must have a lot of knowledge about Islam in depth and also to pass on his knowledge to other muslims. Advisor/Teacher: The imam should also be someone that the community can turn to for advice and help, therfore he is a teacher. The imam also has the duty of teaching the children about Islam and also how to recite the Quran. A guide to practical affairs- As the Imam is a leader he also has responsibilities of the community which also means he is responsible for the follower's actions. He must be responsible and well-informed and obtain such knowledge in order to tell the community of any social affairs and how Islam responds to them. He should possess the quality of being able to help resolve many sorts of conflicts and discuss such issues. A role model - The prophet is the perfect role model for Muslims. The Imam should be someone who the muslim Ummah can look up to therefore he must not be a wicked or evil person who commits sins. A person who is aware of his congregations needs - He must be aware to the needs of his followers and must not prolong the ruku ...read more.

The reason being is the fact that Allah laid down five compulsory rules and if these rules are followed then that Muslim is good. Nevertheless a good muslim is also one who follows the sunnah of the Prophet (saw), who always attended the mosque, the Prophet (saw) lived in a building which was attached to the mosque, and visited the mosque all the time, so shouldn't we follow in his footsteps and righteous example? If there wasn't a Masjid the significance of salaah wouldn't be stressed. Not only this but one of the five pillars of islam is salaah which is fardh upon every muslim, and praying in congregation is wajib upon every muslim male, this is just about close to compulsory, which brings unity and equality. Praying in congregation is not just wajib but also beneficial and rewarding. Abdullah bin Omar RA narrates that he heard the Prophet SAW saying: "Salah with jamat is 27 times superior to Salah performed individually" This shows the reward of praying in congregation not only do you get rewarded for your salaah but also for entering the mosque. However a Muslim may have a good heart and want to pray in the mosque but things such as work/school may be holding him back, although if his school allows him to go to pray and he doesn't, then he is basically a bad Muslim. Overall, I have come to the conclusion that a bad muslim is one who doesn't attend the mosque even when he has the opportunity to do so. ...read more.