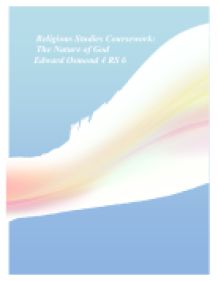 God is not a physical object and therefore all physical interpretations made of him e.g. pictures will be distortions of the true divinity. Another problem that arises in describing God is the language used when doing so. Christians tend to use certain attributes to attempt to describe God, and these attributes normally come from our surroundings and from the world such as rock or shield. However, because God transcends all human description, this causes a problem and leaves us with no words to use to describe God. However, Christians have said in response to this that we can use words that we usually give to objects because God can possess them but only in an infinite degree. Christians also justify this in two ways. Firstly is the incarnation. This means that, if Jesus is the image of the unseen God then we can know what God is like by looking at the image of Jesus, as said in Colossians 1:15 'He is the image of the invisible God, the firstborn over all creation.' There is a problem with this however because we do not have a definitive image of Jesus and can therefore we cannot base our judgement of God on this. The second justification is causation. Causation means that we judge someone by something that it makes or leaves behind for instance we describe a murderer based on the dead body that he has left behind. The same can be applied to mankind in the sense that we, mankind, are the corpse and the murderer is God. [I would like to point out that I am in no way attributing murderous qualities to God]. This means that we can base our views of God on what he has left behind or created, us. This is backed up by the Trademark Argument which is similar to the ontological argument but goes as follows. 'I have an idea of God. ...read more.

The second story is that of the Celestial City. The Celestial City goes as follows, 'Two men are traveling together along a road. One of them believes that the road will lead them to the Celestial City, whereas the other believes that the road leads nowhere. However, since this is the only road, the two men have no option but to travel along it. Neither of them has been that way before, so each twist and turn is new. They share the experiences of the journey, only differing on what they believe is at the end of their travels. On the journey there are both times of enjoyment and times of hardship and danger. Each interprets them differently to the other. All of the time, traveler A who believes that the Celestial City is at the end of the journey thinks of the journey as like a pilgrimage. He sees the pleasant parts as encouragements, and the difficult parts as trials he must endure to show that he is indeed worthy of entering the Celestial City. The other, however, believes none of this. Traveler B sees the journey as unavoidable and pointless, he has no choice. So he enjoys the good and endures the bad times. There is no wonderful end to the journey, no Celestial City, just the luck of the road. When they turn the last corner it will be apparent that one of them has been right all the time and the other wrong. Only then will the truth be known.' This story shows that you can verify all truth claims and therefore they must be meaningful, however Wittgenstein believes that language is not meaningful. This leads me onto my own opinion. My basic opinion is that no, I do not believe that we would be able to prove God's existence if He were to exist. I believe that it is not intended for us to prove His existence, and that he is an omnipresent, supremely perfect being that transcends humanity and its reason. ...read more.