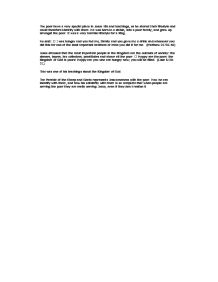 The poor have a very special place in Jesus life and teachings, as he shared their lifestyle and could therefore identify wit

The poor have a very special place in Jesus life and teachings, as he shared their lifestyle and could therefore identify with them. He was born in a stable, into a poor family, and grew up amongst the poor. It was a very humble lifestyle for a King. He said: I was hungry and you fed me, thirsty and you gave me a drink and whenever you did this for one of the least important brothers of mine you did it for me. (Matthew 25:35-40) Jesus stressed that the most important people in the Kingdom are the outcasts of society: the sinners, lepers, tax collectors, prostitutes and above all the poor. Happy are the poor; the Kingdom of God is yours! Happy are you who are hungry now; you will be filled. (Luke 6:20-21) This was one of his teachings about the Kingdom of God. The Parable of the Sheep and Goats represents Jesus oneness with the poor. How he can identify with them, and how his solidarity with them is so complete that when people are serving the poor they are really serving Jesus, even if they don t realise it Poverty is a big issue in the world - particularly the developing world - and it causes great suffering in the world. It s causes and effects are of great concern for Christians. It is not only Christians who care for those in need. Many people of good will give to charities, raise funds and campaign to help the less fortunate people of the world. Christians care about those in need for very specific religious reasons. Christians believe that they have a responsibility to combat poverty in the world, and a duty to care for other people, using many sources of authority to emphasize this. ...read more.

Poverty and the lack of adequate food in the developing world results in poor health. All children need a lot of protein to support their growing needs. In the developing world, very few get the required amount. If they don t get it, they can be severely affected for the rest of their lives, both physically and mentally. Many are malnourished and lack resistance to disease, as a healthy immune system requires a healthy diet. The death rate of children under five in the poorer countries is very high, and poor health as a result of poverty continues as the individual gets older - which makes the average life expectancy considerably lower in these countries (50), than in Britain (73), a more economically developed country. A typical three-year-old in a developing country will have had sixteen bouts of diarrhoea, ten infections of the chest and throat, an attack of the measles and conjunctivitis, and perhaps malaria or meningitis. This is worked out as an average of one illness every three months for each child. Few children are immunised against common illnesses like measles, which can kill. Lack of good, clean, water is a major cause of poor health in these countries. Half of the world s population do not have access to a clean and adequate water supply. Poor sanitation is common too - 80& of all diseases in the world are water related. There is a distinct shortage of trained doctors and nurses. Many people in developing countries do not have access to adequate medical care, causing disease to spread and conditions to become worse. Many insects carry disease, for example, the mosquito spreads malaria. ...read more.

The organisation strives to be prophetic, challenging the systems that work against the interests the poor and works of the basis of need, regardless of race or religion. They work for world development in four main ways: fund-raising, emergency aid, long-term aid and education. In order to fund their work, money is raised in several ways. Annually, a Christian Aid Week is held in which Churches increase awareness of the need to eradicate poverty and appeal for donations. In 1995, Christian Aid Week raised �8.6 million. Many churches and individuals also have their own fund-raising events throughout the year which raises over �30 million yearly. Christian Aid has a disaster fund which spends between 10-15 per cent of its annual funds on emergency aid. They send food, clothing, antibiotics, blankets and shelters to the disaster stricken, such as the victims of the 1998 Honduras hurricanes and war refugees in Bosnia and Rwanda. As well as supplying emergency aid, Christian Aid sees its function as helping people to help themselves so that they will not need aid. Christian Aid has an advantage over many charities because much of the aid they provide is channelled through Christian organisations within the country concerned. Therefore they can receive feedback and work in cooperation to build the interdependence and development of poverty stricken countries. For example, in Lesotho, Christian Aid is financing a local Christian agricultural school which is trying to increase food production by reducing soil erosion and bringing in new and more practical farming methods. Christian Aid can also strengthen interdependency of people of less developed countries through education. They provide information about the organisations work and information on world development which increases awareness of the unjustness of poverty. For example, the total world expenditure on arms in two weeks, would give everyone in the world enough food, water, education and shelter for one year. ...read more.