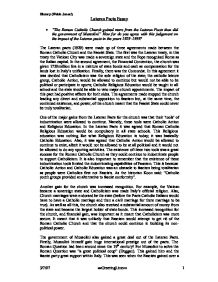 &quot;The Roman Catholic Church gained more from the Lateran Pacts than did the government of Mussolini&quot; How far do you agree with this judgement on the impact of the Lateran pacts in the years 1929-1939?

* "The Roman Catholic Church gained more from the Lateran Pacts than did the government of Mussolini" How far do you agree with this judgement on the impact of the Lateran pacts in the years 1929-1939?

The Lateran pacts (1929) were made up of three agreements made between the Roman Catholic Church and the Fascist State. The first was the Lateran treaty, in this treaty the Vatican City was made a sovereign state and the Pope recognised Rome as the Italian capital. In the second agreement, the Financial Convention, the church was given 1750million lira in a mixture of state bonds and cash as compensation for the lands lost in Italy's unification. Finally, there was the Concordat. In this agreement it was decided that Catholicism was the sole religion of the state; the catholic leisure group, Catholic Action, would be allowed to continue but would not be able to be political or participate in sports; Catholic Religious Education would be taught in all school and the state would be able to veto major church appointments. The impact of this pact had positive affects for both sides. The agreements made stopped the church leading any direct and substantial opposition to fascism but, at the same time, the continued existence, and power, of the church meant that the Fascist State could never be truly totalitarian.

One of the major gains from the Lateran Pacts for the church was that their 'tools' of indoctrination were allowed to continue. Namely, these tools were Catholic Action and Religious Education. In the Lateran Pacts it was agreed that Roman Catholic Religious Education would be compulsory in all state schools. This Religious education was nothing like what Religious Education is today; it was basically Catholic Education. Also, it was agreed that Catholic Action would be allowed to continue to exist, albeit it would not be allowed to be at all political and it would not be allowed to do any sporting activities. The existence of these two tools was a great success for the Roman Catholic Church as they could continue to indoctrinate people to support Catholicism. It is also important to remember that the existence of these indoctrination tools limited the indoctrinating capabilities of Fascism. This is because Catholic Action and Catholic Education was an obstacle to fascism being totalitarian as people were Catholics first not Fascists. As the historian Koon said: "Catholic youth groups provided an alternative to fascist conformity".

Another gain for the church was increased recognition. For example, the Vatican became a sovereign state and Catholicism was made Italy's official religion. Also, Church marriages were endorsed be the state (before the Pacts Catholic Italians would have to have a Catholic marriage and then a civil marriage for there marriage to be true). As well as all this, the church also received a substantial amount of money from the state and became the largest holder of state bonds. This increased recognition for the church, and financial gain, was important as it meant that Catholicism was more secure. It meant that it was unlikely that Fascism would attempt to get rid of the Roman Catholic Church and that the church could continue in building its non-political power.

The government of Mussolini also gained a great deal out of the Lateran Pacts. Firstly, Mussolini himself gain huge international prestige out of the pacts. The Roman Question had been around since the 19th century! For Mussolini to solve the Roman Question was "a great political coup" (Duggan). This gained him and the fascist party great support within Italy. This was seen when the Fascists gained over a million extra votes in the 1929 election. They gained these extra votes because Mussolini was seen as a great figure that was endorsed by the Pope himself. Secondly, the Church was less of a threat to Fascism supremacy. The agreement ensured that there would be no open opposition from the church. This is very important because the church's power in Italy was vast. Also, the agreement meant that the fascist government had more control over the church. For example, all major appointments in the church could be vetoed by the state. This meant that you had to be a fascist to be high up in the church. This ensured that the Church would not oppose the fascist state. However, even with these gains that made the church less of a threat to fascism it must be remembered that with this agreement "fascism surrendered any serious claim to a monopoly on ideology" (Duggan). This meant that fascism could never have complete control over the Italian people.

In conclusion, in assessing how far I agree with the above quote there a four important points to remember. Firstly, the government of Mussolini was given more power over the church. Secondly, the church was not allowed to be political. Thirdly, the church was allowed to continue its indoctrination of Italians. Finally, the church's place in Italy was recognised. Overall, this meant that the church could not mount any opposition to fascism but fascism would not be the only body trying to indoctrinate Italy, and was thus not able to fulfil its ambition of being totalitarian. Therefore, I believe the Church gained the most out of the Lateran Pacts.