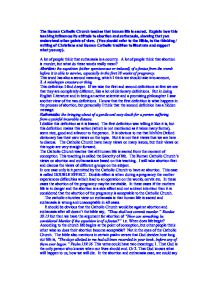 The Roman Catholic Church teaches that human life is sacred. Explain how this teaching influences its attitude to abortion and euthanasia, showing that you understand other points of view

The Roman Catholic Church teaches that human life is sacred. Explain how this teaching influences its attitude to abortion and euthanasia, showing that you understand other points of view. (You should refer to the Bible, to the thinking / writing of Christians and Roman Catholic tradition to illustrate and support what you say). A lot of people think that euthanasia is a country. A lot of people think that abortion is murder, but what do these words really mean? Abortion: the expulsion (either spontaneous or induced) of a foetus from the womb before it is able to survive, especially in the first 28 weeks of pregnancy. This word has also a second meaning, which I think we should take into account, 2. A misshapen creature or thing This definition I find deeper. If we take the first and second definitions at first we see that they are completely different, like a lot of dictionary definitions. But in doing English Literature and in being an active scientist and a promising philosopher I saw another view of the two definitions. I know that the first definition is what happens in the process of abortion, but personally I think that the second definition has a hidden message. Euthanasia: the bringing about of a gentle and easy death for a person suffering from a painful incurable disease. I dislike this definition as it is biased. The first definition was telling it like it is, but this definition makes this action (which is not mentioned as it takes many forms), seem nice, good and a favour to the person. It is obvious to me that Mr/Mrs Oxford dictionary has their own views on the topic. But it is not their views that we are here to discuss. The Catholic Church have many views on many issues, but their views on this topic are very straight forward. The Catholic Church teaches that all human life is sacred from the moment of conception. ...read more.

They offer support to families, information on how to be euthanised and advise on how to make your will, all on their website which discusses both reasons for and against euthanasia. Organisations against euthanasia hold the following views: * Its murder * No one has the right to end life * It is morally wrong * The patient might be in the wrong state of mind * It devalues human life * It goes against the Hippocratic Oath These organisations are also known as PRO-LIFE and include CURE (Citizens United Resisting Euthanasia). They also offer support for families as well as giving advise to patients on why life matters. The opposition can cancel out the arguments put forward by one of the groups, so it is hard to decide which is right and which is wrong. Personally I think that you would need to be in the situation yourself before you could say either I am for or I am against abortion and euthanasia. The Catholic Church influences a lot of these decisions made by people who are in the pro-life groups, and on all of the websites that I entered on the subject Christianity and the views of the Christian church were mentioned somewhere. One main thing I noticed was that in the abortion websites there were links to the euthanasia websites and to advice and support groups. There is definately a link between the two topics and the church. The teaching that human life is sacred applies to the teaching that abortion and euthanasia are wrong. If all human life is sacred then the destruction of that life is considered wrong in the eyes of the Roman Catholic Church. But even though the church has its views and these views are well known in society, it is entirely up to the person in question as to whether abortion or euthanasia is the right option for them. ...read more.

God may be the only person who has the right to take life away, but he isn't the only person who does it. If as my parents believe, God decides that life should be given then God has his say in all the genetic engineering and he allows the penetration to occur, or the cells to divide or the baby to grow. One thing my father said when I put the arguments to him was a very good point, "What comes first the chicken or the egg?" I had to think about it and I said egg and he said well then how did the egg get there and where did the chicken evolve from and how did the earth begin and the universe and who caused the big bang? I was totally not winning that argument basically because I don't know, no one knows. People in ancient times as far back as Roman Empire didn't have advances in medicine that we have. They didn't know what caused illness or disease so they came up with supernatural explanations claiming that spirits made you ill and Gods like Asclepios made you well again. It wasn't until the ancient Greek philosophers began asking questions that discoveries were made giving explanations other than the supernatural that people began to understand the human body and how it works. People now days still have their Gods and beliefs in cure through prayer. Thousands of people flock to Lourdes each year with the faith that they will be cured, and many are. Whether or not there is a God we might never know. Maybe in years to come people will make more discoveries, which can answer the questions of the world. People in the future might laugh at us for our thoughts and theories as we today laugh at the ancient Egyptians because they thought that evil spirits caused disease. Until these discoveries are made we are left with the option to have faith or not to have faith. ...read more.