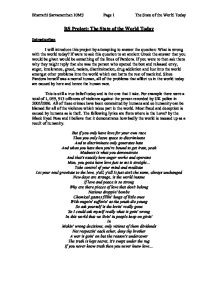 The State of the World Today

RS Project: The State of the World Today Introduction I will introduce this project by attempting to answer the question: What is wrong with the world today? If were to ask this question to an ancient Greek the answer that you would be given would be something of the lines of Pandora. If you were to then ask them why they might reply that she was the person who opened the box and released envy, anger, intolerance, greed, racism, discrimination, drug addiction and lust into the world amongst other problems into the world which can harm the rest of mankind. Since Pandora herself was a mortal human, all of the problems that affect us in the world today are caused by here and hence the human race. This is still a true belief today and is the one that I take. For example there were a total of 1, 059, 913 offences of violence against the person recorded by UK police in 2005/2006. All of these crimes have been committed by humans and so humanity can be blamed for all of the violence which takes part in the world. Most fraud and deception is caused by humans as is theft. The following lyrics are from where is the Love? by the Black Eyed Peas and I believe that it demonstrates how badly the world is messed up as a result of humanity. But if you only have love for your own race Then you only leave space to discriminate And to discriminate only generates hate And when you hate then you're bound to get irate, yeah Madness is what you demonstrate And that's exactly how anger works and operates Man, you gotta have love just to set it straight... Take control of your mind and meditate Let your soul gravitate to the love, y'all, y'all It just ain't the same, always unchanged New days are strange, is the world insane If love and peace is so strong Why are there pieces of love ...read more.

In terms of the methods for conserving animal rights, Christians prefer the method of Non-violent protest. They would not usually opt for violence because it goes against agape (unconditional love for your brethren), the 2nd great commandment given by Jesus (love your neighbour as you would yourself). Furthermore if the violent protests resulted in death then Christians would be seen to be going against the "thou shalt not kill" commandment. Non-violent protest avoids all of the aforementioned problems but still allows for the message to be portrayed powerfully. Hinduism also takes a clear stance on this issue. Hinduism condemns any form of violence to any sentient being (including animals) and through that preaches ahimsa. Furthermore by hurting animals Hindus believe that they are only building negative karma for themselves which will in turn affect their chances of a good rebirth in the cycle of samsara. A final reason is the idea of vahanas. Hindus believe that every god and goddess has their own vahana. A vahana is an animal that the deity uses to travel around the universe (e.g. the vahana of Lord Ganesh is a rat) and hence these animals are regarded as being sacred. Therefore, by harming these animals (there are many of them as there are many deities in Hinduism); Hindus may say that you are harming God which would build up negative karma and affect the cycle of samsara. Like Christianity, Hinduism believes that the best way to conserve the rights of animals is through non-violent protests. As I have already mentioned, Hinduism preaches Ahimsa (non-violence) because violence generates negative karma. Through non-violent protests these problems can be solved because the message of the important of the conservation of animal rights can still be portrayed powerfully. Q4) What are the differing religious responses to vegetarianism? A4) Christians are not 100% sure on the issue of vegetarianism as through religious scriptures and teachings, two different views can be established. ...read more.

Karuna also aims to enable people to become self sufficient. Instead of giving material help, which might give rise to an attitude of dependency, they try to create situations where people can come together to find common solutions to their own difficulties. As a solution to this the Karuna trust is currently supporting 14 sewing classes, 3 shops, 2 horticultural and agricultural products and many other social work training schemes. Conclusion To conclude this project I shall attempt to answer the question: Is there anything really wrong with the world today? I believe that the answer to this question is both yes and no. I believe that it is yes in the sense that there are still thousands of people needlessly dying each day, beautiful countryside views are being destroyed by office blocks and we are slowly killing the earth with our CO2 and other greenhouse gas emissions. However, I also believe that the answer is no as there are many charitable organizations that attempt to alleviate suffering in the world. I have already talked about the Karuna trust which is tackling the plight of the dalits in India. The United Nations has on many occasions stopped wars and promoted peace. Charities such as Oxfam are trying to supply the people of the drought stricken parts of Africa with basic needs such as clean drinking water. All in all I believe that the world is almost perfect and what goes around comes around. The perfectionisms of the world aren't always apparent but when love is present they are always visible. And I know that it's a wonderful world But I can't feel it right now Well I thought that I was doing well But I just want to cry now Well I know that it's a wonderful world From the sky down to the sea But I can only see it when you're here, here with me [James Morrison: Wonderful World] ?? ?? ?? ?? Bharrathi Sarvananthan 10M3 Page 1 The State of the World Today ...read more.