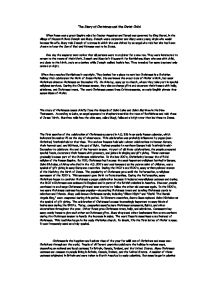 The Story of Christmas and the Christ Child

The Story of Christmas and the Christ Child When Rome was a great Empire ruled by Caesar Augustus and Israel was governed by King Herod, in the village of Nazareth lived Joseph and Mary. Joseph was a carpenter and Mary was a young virgin who would become his wife. Mary told Joseph of a dream in which she was visited by an angel who told her she had been chosen to bear the Son of God and his name was to be Jesus. One day the emperor sent notice that all persons were to register for a new tax. They were instructed to return to the towns of their birth. Joseph and Mary left Nazareth for Bethlehem. Mary who was with child, and close to the birth, rode on a donkey while Joseph walked beside her. They traveled for many days and only rested at night. When they reached Bethlehem it was night. They looked for a place to rest but Christmas is a Christian holiday that celebrates the birth of Jesus Christ. No one knows the exact date of Christ's birth, but most Christians observe Christmas on December 25. On this day, many go to church, where they take part in special religious services. During the Christmas season, they also exchange gifts and decorate their homes with holly, mistletoe, and Christmas trees. The word Christmas comes from Cristes maesse, an early English phrase that means Mass of Christ. The story of Christmas comes chiefly from the Gospels of Saint Luke and Saint Matthew in the New Testament. According to Luke, an angel appeared to shepherds outside the town of Bethlehem and told them of Jesus' birth. Matthew tells how the wise men, called Magi, followed a bright star that led them to Jesus. The first mention of the celebration of Christmas occurred in A.D. 336 in an early Roman calendar, which indicates December 25 as the day of observance. This celebration was probably influenced by pagan (non-Christian) festivals held at that time. ...read more.

Children in some Latin-American countries, including Brazil, Colombia, and parts of Mexico, receive gifts on Christmas Day. In Argentina, Venezuela, Puerto Rico, and most areas of Mexico, the wise men leave the presents on the eve of Epiphany. In Asia. Relatively small numbers of Christians live in the countries of Asia, and so Christmas is not widely celebrated there. In areas where Christmas is observed, people follow such Western customs as attending religious services, giving presents, singing carols, and decorating Christmas trees. Many department stores display a huge Christmas tree. People dressed as Santa Claus mingle with the crowds of shoppers. In the Philippines, people attend Misas de Gallo (Masses of the c**k), which are celebrated early each morning on the nine days before Christmas. On Christmas Eve, Filipinos parade through the streets carrying colourful star-shaped lanterns called parols. These lanterns are also displayed in the windows of most Filipino homes. On Christmas Eve, Christians from throughout the world gather for midnight Mass in Bethlehem, the town near Jerusalem where Jesus was born. They kneel to kiss the silver star that is set in the ground at the spot where Jesus' birth is believed to have taken place. In Africa, as in Asia, the celebration of Christmas is not widespread because most of the countries have a small Christian population. Missionaries took Christmas customs to Africa and so people in the Christian communities generally follow Western traditions. However, Africans may sing carols and hymns in their own languages or in the language of the church. In Ethiopia, members of the Ethiopian Orthodox Church hold religious services at Christmas, on January 7. The major celebration takes place nearly two weeks later at Epiphany. Religious practices. For most Christians, the Christmas season begins on the Sunday nearest November 30. This date is the feast day of Saint Andrew, one of the 12 apostles of Christ. The nearest Sunday is the first day of Advent, a four-week period during which Christians prepare for the celebration of Christmas. ...read more.

In one cave was a stable room. Joseph cleaned it and made beds of fresh hay. He found a feeding trough which he cleaned and filled with hay to use as a crib. The next night Mary gave birth to a son and they named him Jesus, as the angel had said. When the child was born a great star appeared over Bethlehem that could be seen for miles around. In the fields nearby shepherds were tending their flocks. An angel appeared to them surrounded by bright light. The shepherds were frightened and tried to run. "Fear Not," said the angel, "For I bring you tidings of great joy. For unto you is born this day in Bethlehem - a Saviour who is Christ the Lord." And this shall be a sign unto you. You shall find the babe wrapped in swaddling clothes and lying in a manger." Suddenly the sky was filled with angels, praising God and saying, "Glory to God in the Highest, and on Earth peace, good will toward men."After the angels departed the shepherds set out for Bethlehem. When they reached the cave they found the stable and inside was the child wrapped in swaddling clothes.As the star shined over Bethlehem, in the east three kings would see it. They knew it was a sign and they set off to follow the star. There was Caspar - the young King of Tarsus, Melchior - a long bearded old man and leader of Arabia, and Balthazar - the king from Ethiopia. They traveled on camels for many days over the mountains, and through the deserts, and plains. Always following the bright star. When they finally arrived in Bethlehem they found the child in the manger. The 3 kings bowed to their knees and offered gifts of gold, frankincense, and myrrh. They would stay the night in the cave and the next day returned to their lands to spread the news. ...read more.