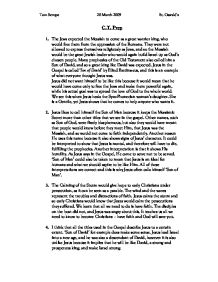 The Titles of Jesus

C.T. Prep 1. The Jews expected the Messiah to come as a great warrior king, who would free them from the oppression of the Romans. They were not allowed to express themselves religiously as Jews, and so the Messiah would be the great Jewish leader who would again build Israel up as God's chosen people. Many prophesies of the Old Testament also called him a Son of David, and so a great king like David was expected. Jesus in the Gospel is called 'Son of David' by Blind Bartimaeus, and this is an example of what everyone thought Jesus was. Jesus did not want himself to be like this because it would mean that he would have come only to free the Jews and make them powerful again, while his actual goal was to spread the love of God to the whole world. ...read more.

Another interpretation is that it shows His humility. As Jesus says in the Gospel, He came to serve not to be served. 'Son of Man' could also be taken to mean that Jesus is an ideal for humans and what we should aspire to be like Him. All of these interpretations are correct and this is why Jesus often calls himself 'Son of Man'. 3. The Calming of the Storm would give hope to early Christians under persecution, as it can be seen as a parable. The wind and the waves represent the troubles and distractions of faith. Jesus calms the storm and so early Christians would know that Jesus would calm the persecutions they suffered. ...read more.

The title 'Son of Man', which Jesus calls himself is accurate to Jesus as it shows, as I have explained above, Jesus' humility, humanity and that he is an ideal for man kind. The one thing it does not plainly show us is Jesus link to the God and the fact that he is divine as well as mortal. A title which does highlight this fact however is 'Son of God', it is appropriate as it highlights his divine nature, even though he is mortal. It shows he is part of the Trinity and explains why He has power on earth, such as the fact that He is Lord of the Sabbath, as he tells the Pharisees. Tom Scrope 20 March 2009 St. Oswald's ...read more.