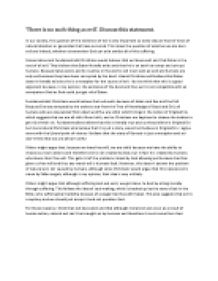 'There is no such thing as evil' Discuss this statement.

﻿?There is no such thing as evil?. Discuss this statement. In our society, the question of the existence of evil is very important as every day we hear of news of natural disasters or genocides that have occurred. This raises the question of whether we are born evil and indeed, whether a benevolent God can exist amidst all of this suffering. Conservative and Fundamentalist Christians would believe that evil does exist and that Satan is the root of all evil. They believe that Satan literally exists and that he is on earth to tempt and corrupt humans. Because Satan exists and he is active in the world, evil must exist as well and humans are only evil because they have been corrupted by the devil. ...read more.

Because Eve was tempted by the snake to eat from the Tree of Knowledge of Good and Evil, all humans who are descended from Adam and Eve are sinful which brings in the notion of Original Sin, which suggests that we are all sinful from birth, and so Christians are baptised to cleanse the babies to get rid of their sin. Fundamentalists believe that this is literally true and so they believe in Original Sin but more Liberal Christians who believe that it is just a story, would not believe in Original Sin. I agree more with the Liberal point of view as I believe that the story of Genesis is just a metaphor and so I don?t think that we are all born ...read more.

However, this doesn?t answer the problem of natural evil, not caused by humans, although some Christians would argue that this natural evil is cause by fallen angels, although in my opinion, that idea is very unlikely. Others might argue that although suffering and evil exist, we get closer to God by acting morally through suffering. This follows the idea of soul-making, which is backed up by the story of Job in the Bible, who suffers great hardship because of a wager God has with Satan. This also suggests that evil is a mystery and we should just accept it and not question God. For these reasons, I think that evil does exist and that although moral evil can occur as a result of human action, natural evil can?t be brought on by humans and therefore it must come from God. ...read more.