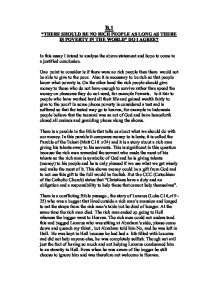 THERE SHOULD BE NO RICH PEOPLE AS LONG AS THERE IS POVERTY IN THE WORLD&quot; DO I AGREE? In this essay I intend to analyse the above statement and hope to come to a justified conclusion.

B.1 "THERE SHOULD BE NO RICH PEOPLE AS LONG AS THERE IS POVERTY IN THE WORLD" DO I AGREE? In this essay I intend to analyse the above statement and hope to come to a justified conclusion. One point to consider is if there were no rich people then there would not be able to give to the poor. Also it is necessary to be rich so that people know what poverty is. On the other hand the rich people should give money to those who do not have enough to survive rather than spend the money on pleasures they do not need, for example Ferraris. Is it fair to people who have worked hard all their life and gained wealth fairly to give to the poor? In some places poverty is considered a test and is suffered so that the tested may go to heaven, for example in Indonesia people believe that the tsunami was an act of God and have henceforth closed all casinos and gambling places along the shores. ...read more.

There is a conflicting Bible passage , the story of Lazarus (Luke C16,v19-25) who was a beggar that lived outside a rich man's mansion and longed to eat the straps from the rich man's table but he died of hunger. At the same time the rich man died. The rich man ended up going to h**l whereas the beggar went to Heaven. The rich man could not understand this and begged Lazarus who was sitting at Abraham's side, please come down and quench my thirst , but Abraham told him No, and he was left in h**l. He was kept in h**l because he had had a life filled with luxuries and did not help anyone else, he was completely selfish. Though not evil just the fact of having so much and not helping Lazarus condemned him to an eternity in h**l. Even when he was aware of the beggar he still choose to ignore him and was therefore not welcome in Heaven. ...read more.

But as a warning to those who do not give anything to anyone Jesus told the Parable of the sheep and goat in which he said at the end of the world I will be there and separate the sheep from the goat - those who followed my word and those who did not. In conclusion my personal view , even though I am a Catholic ,is I do not think people should have to give excessively to charity. I feel that people should be made aware of those who suffer and as Christians should act and help them but not to the point where they themselves become unable to feed themselves. So charity in moderation would be my view. I do not think it is fair on those that have worked hard to give their money away however it comes down to a matter of personal choice. The teachings of the Catholic faith are clear - we must love others as ourselves and do unto others as we would want done to us. ...read more.