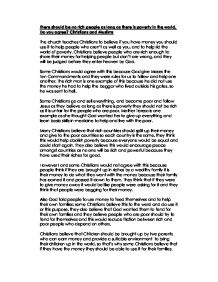 There should be no rich people as long as there is poverty in the world. Do you agree? Christians and Muslims

There should be no rich people as long as there is poverty in the world. Do you agree? Christians and Muslims The church teaches Christians to believe if you have money you should use it to help people who aren't as well as you, and to help rid the world of poverty. Christians believe people who are rich enough to share their money for helping people but don't are wrong, and they will be judged before they enter heaven by God. Some Christians would agree with this because God give Moses the Ten Commandments and they were rules for us to follow and help one another. The rich man is one example of this because he did not use the money he had to help the beggar who lived outside his gates, so he was sent to hell. Some Christians go and sell everything, and become poor and follow Jesus as they believe as long as there is poverty they should not be rich as it is unfair for the people who are poor. Mother Teresa is one example as she thought God wanted her to give up everything and learn basic skills in medicine to help and live with the poor. ...read more.

Even though you need money to get through life, it isn't the most important thing on Earth. You don't know that, (for example) you'll ever be able to drive that extra Ferrari you've ordered because you may have an accident and never be able to walk again, never mind drive!!! When you get buried (when you die), you might ask for 3 million diamonds to be put in your grave with you, but all these jewels will never go with your soul to Allah - only your good and bad deeds will go with you. Nothing else. If you give your wealth to the poor, it will benefit you with good deeds and benefit the poor with a better quality life. So, basically, your wealth does not stay with you forever so it would be best to use it in a beneficial way. Other people say that there should be rich Muslims because as long as they give their bit of zakah to the poor Muslims, it's okay for them to have more money than others. They believe that if Allah decided to give them more wealth than he gave the others, then obviously they're meant to be richer than the others. ...read more.