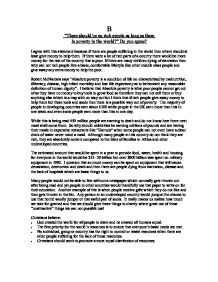 B "There should be no rich people as long as there Is poverty in the world?" Do you agree? I agree with this statement because if there are people suffering in the world then others should at least give money to help them. If there were a lot of rich parts of a country there would be more money for the rest of the country that is poor. If there are many children dying of starvation then why can not rich people live a basic, comfortable lifestyle like other middle class people and give away any extra money to help the poor. . Robert McNamara says "Absolute poverty is a condition of life so characterized by malnutrition, illiteracy, disease, high infant mortality and low life expectancy as to be beneath any reasonable definition of human dignity". I believe that Absolute poverty is what poor people cannot get out of as they have no money to buy tools to grow food so therefore they can not sell them or buy anything else which is a trap ...read more.

Another example of this is when people receive gifts which they do not like and then gets thrown in the bin. Any person in an undeveloped country would jump at the chance to use that horrid woolly jumper or that awful pair of socks. It really makes us realize how much we take for granted and that we should give these things to charity where great use of these "unattractive" things we can not possible use! Christians believe: * God created the world for all people to share and he created all humans equal. * The first priority for the world's resources is to ensure that everyone's basic needs are met. * No individual, group or country has the right to control or waste resources when there are other people suffering for the lack of those resources. * Christians should work to promote a more equal distribution of resources. Small problems could be solved by the giving of small amounts from rich people. ...read more.

The government may have unreasonable tax rates or may not help the poorer parts of the country. In my final opinion I believe that both arguments are reasonable but for someone not to help another person when they are in a bad situation would make me feel greedy and undeserved for what I have really achieved. I also believe that as long as people have earned their money then they should be able to keep it but I think that celebrity's that can afford to have their doors French polished should give money out especially when they earn over the average wage limit for how much effort they actually put into their work. I also think that a lot of the developed countries need help in more ways than by given handouts repeatedly. Most of all the poorer people need to learn how to help themselves and not rely on others. They need to learn more about health, education, building etc. If they know these things then they can pass their knowledge on to other members of their families and other villages. ?? ?? ?? ?? ...read more.