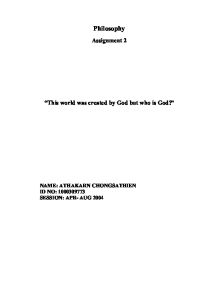 &quot;This world was created by God but who is God?&quot;

Philosophy Assignment 2 "This world was created by God but who is God?" NAME: ATHAKARN CHONGSATHIEN ID NO: 1000309773 SESSION: APR- AUG 2004 What is god? To say what is God is, it is natural for some to answer that "I don't know or no one knows." Some belief that God is person that is believed to have power over nature and control over affairs. Many people believe that the world was created by him. However, God is totally beyond the comprehension of mere finite beings such as ourselves, and many people believe that we should not go about pretending that we can know what God is. For the people who belief that God as exist, most of the cases people would belief in God base on the religious belief such as Mythology or tales that have passed through from generation to generation. Also supernatural that they have heard or faced by themselves. For the people who belief that God does exist, they belief that God is an eternally existent spirit that exists apart from space and time. He is the creator of the world. God is all-powerful, all-knowing, and also all-loving. Several aspects of this definition appear, to many thinkers, to need some explanation. ...read more.

The Dead Sea Scrolls and other archaeological discoveries continue to substantiate the historical accuracy of the Bible. The Bible was written over a 1500-year span, by 40 different authors, in different locations and on separate continents, written in three different languages, covering diverse subject matters at different points in history. Yet there is surprising consistency in its message. Throughout the entire Bible the same message appears Jesus Christ is the clearest, most specific picture of God. Jesus is able to perform miracles. He healed people who blind, crippled, deaf, even raised a couple of people from the dead. He had power over objects such as created food out of thin air, enough to feed crowds of several thousand people. He performed miracles over nature, as he walked on top of a lake, commanding a raging storm to stop for some friends. People everywhere followed Jesus, because He constantly met their needs, doing the miraculous. He said if you do not want to believe what I'm telling you, you should at least believe in me based on the miracles you're seeing. The most conclusive proof that Jesus is equal to God was Jesus' most closely scrutinized miracle, his own resurrection from the dead. Jesus said that three days after His burial He would come back to life. ...read more.