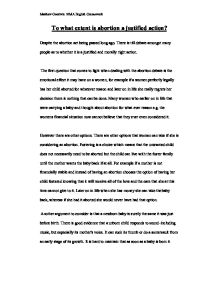 To what extent is abortion a justified action?

To what extent is abortion a justified action? Despite the abortion act being passed long ago. There is till debate amongst many people as to whether it is a justified and morally right action. The first question that comes to light when dealing with the abortion debate is the emotional effect it may have on a women, for example if a women perfectly legally has her child aborted for whatever reason and later on in life she really regrets her decision there is nothing that can be done. Many women who earlier on in life that were carrying a baby and thought about abortion for what ever reason e.g. the womens financial situation now cannot believe that they ever even considered it. However there are other options. There are other options that women can take if she is considering an abortion. Fostering is a choice which means that the unwanted child does not necessarily need to be aborted but the child can live with the foster family until the mother wants the baby back if at all. ...read more.

The child would be a permanent reminder of what happened and I think that, at first, almost certainly it would be hard to love that child like it was made between two people that love each other. Another point against abortion is that the way that a baby is formed is by the process of cell division which is that one cell becomes two, two become four, and so on. By the tenth day, the fertilised egg has become a sort of hollow ball moving around the womb. It destroys tissue in its paths and sucks on maternal blood as it struggles to get more energy. Then it clings to the wall of the uterus for a few days. By the third week the forming embryo is about 2 millimetres long and is developing various body parts. Only at this stage does it begin to be depend on the mothers food supply. By the end of the fourth week, it's about 5 millimetres long. ...read more.

Different kinds of thinking show different kinds of brain waves. But brain waves which are typical of human brains do not appear in the foetus until about the 30th week of growth. Foetuses younger than this however alive and active they may be lack the ability to be able to think. Trying to make a law about the fate of an animal is hard enough let alone a foetus that may and probably will have become a human being. If we are forced to choose a exact point at which you cannot have your baby aborted past, then this is where most people believe that the line should be drawn: before the baby develops the power to think. In conclusion, it is apparent that it is up to the individual as to whether they feel abortion is morally right or suitable for them. Obviously, circumstances with regards to finance and relationship change, and in some cases abortion seems the only sensible option. However, it is important to consider all the options available and other factors such as religious beliefs, which may effect the final decision Matthew Goodwin 10MA English Coursework ...read more.