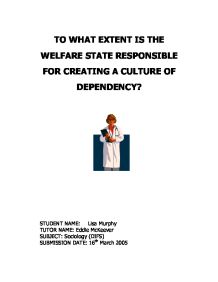 To What Extent Is the Welfare State Responsible For Creating a Culture of Dependency?

Although changes have been introduced in the system since it was initiated between 1945-50, it remains fundamentally the same. However, from 1979 to 1997 the Conservative government showed that it would like to see the system, partially dismantled in favour of a two-tier scheme. For instance, in the sphere of medicine, it would like to have seen more people paying for private health care whilst only those who could not afford to pay would go to the National Health Service. The reasons why the Labour Government introduced a Welfare State have to be seen against: > The background of twenty hears of mass unemployment before the Second World War, when there was little help given to alleviate poverty. > The previous measures introduced by the Liberal government were found to be totally inadequate. > The wartime destruction of British cities gave the drive for the construction of new, better-built houses in well planned environments. > There was an overwhelming desire shared by the mass of the British people never to return to pre-war conditions. Advantages of the Welfare State > It has eliminated the worst excesses of poverty > It helps people who through no fault of their own (such as a physical disability) are unable to work, and without financial aid would be reduced to begging or voluntary charity. ...read more.

Those who are on this benefit do not have to pay council tax, or prescription and dental charges amongst others. If this benefit did not exist families may be better off on unemployment benefit. Dean and Taylor-Gobby have also criticised the dependency theory. They argue that the idea that the Welfare State has created a population who are content not to work, is a myth. Dean and Taylor-Gobby carried out an investigation which involved conducting eighty five in depth interviews of benefit claimants. They found that all but four of their sample had not lost the desire to work. However, they did find that some of their sample were reluctant to come off welfare benefits to take low paid work, thus, supporting the work of Jordan. Therefore it can be argued that rather than welfare benefits creating a burden of dependency, it has created a reluctant population of dependants. In conclusion, it would appear that if sociologists and politicians wish to understand the reasons why individuals do not give up a life on welfare for a job, the world of work needs to be examined. The government however, are doing very little to tempt people back into the workforce, therefore it could be said that the government are somewhat contributing to this dependency. It would then seem that in this instance that the government wants to have its cake and eat it. ...read more.